What the P-S Won't Tell You About: The Villanova Wildcats

Share All sharing options for: What the P-S Won't Tell You About: The Villanova Wildcats 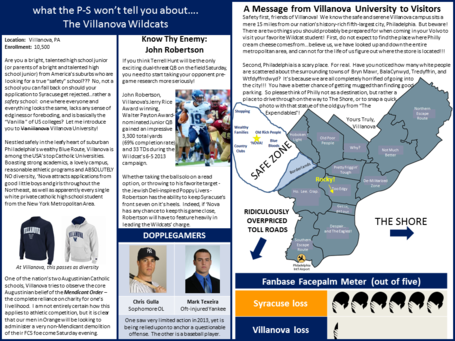 Welcome back Magicians for another season of (hopefully) humor-filled nonsense parodying our 2014 football opponents!  Following HCSMFS's direction, I've locked the doors, brought guns to the fight and am as #hard as I can be to bring you our first preview of the season...wait, that last bit didn't come out right...

Anyway...we start our newest football journey with an opponent that is unfamiliar, yet TOTALLY familiar to us all.  Yes, the Villanova Wildcats football team comes to The Dome for the first time for what we hope will be an easy victory for The Orange.  One where we'll hopefully see Mitch Kimble running for multiple scores in fourth-quarter-garbage-time while our traffic-panicked comrades can comfortably leave the game early and avoid two turns of the light at the corner of Comstock and E Colvin.

Regardless, it is a chance to heap some misery on our friends from suburban Philadelphia, and get a first glance of Year Two of the Scott Shafer Era.  With a more experienced team taking the field (players and coaches alike), the promise of a faster and more versatile offense, and the guarantee of an aggressive high-stakes defense, I think this team has the qualities to grab seven-plus regular season wins and surprise many prognosticators who seem endearingly rooted to the old narrative that circa-2007 Syracuse Football somehow magically has a relation to 2014 Syracuse Football.

Want to think we aren't that good?  Fine with me.  It only makes your tears taste better when our guys knock the snot out of your guys...*

In this week's preview, we introduce you to the Villanova Wildcats, a school that honestly needs no introduction.  A school that stays true to its Catholic roots, steadfastly refuses to heed the siren song of D1 football, and is widely described as the most diverse university in the nation, the northeast, the State of Pennsylvania, the city of Philadelphia, the western suburbs of Philadelphia, the general vicinity of Lancaster Pike and Haverford Road.