In the end, was there ever really any doubt about this one?

We started today's SOFA celebration by unveiling the Syracuse offensive line as the co-winners of our Offensive Player of the Year award, and now we name the top Orangeman on defense... 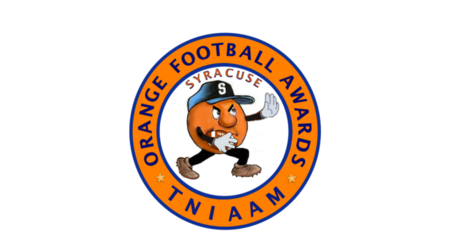 Let's take a look on how some of you guys votes:

Commenter Lots of Pulp saw the value in Jay Bromley, but ultimately went with Marquis Spruill:

StealthTurkey went with Eskridge on the strength of his takeaways:

Ultimately, however, this one was all about Jay Bromley.  All seven of our esteemed writers chose Jay in the voting.

Jared focused on Jay's impact on the rest of the defense:

Jay Bromley -- By far the best Syracuse defender. He anchored the DL, which freed up Robert Welsh for a few sacks and took pressure off of some of the younger DTs that always played well during the season. He is a fantastic story overall and should make a steady pro.

Jay Bromley. Quite simply, he was the meanest, prettiest, baddest mofo low down around this town. From a zero-star, zero-offer prospect to NFL-ready lineman, Jay is everything we root for in our athletes.

And you guys chose him as well in the public vote: 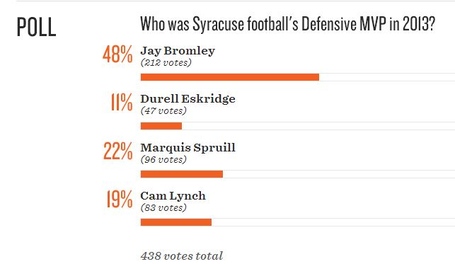 More categories and winners are on the way tomorrow.  Thanks for voting, everyone!