The Quest For Belk, Week 7 Update: Half Way Home

The Orange won this week meaning they are half way home to getting Belky.

Share All sharing options for: The Quest For Belk, Week 7 Update: Half Way Home

Before Saturday's contest against N.C. State many of us believed if the Syracuse Orange were serious about contending for a postseason bowl invite they needed to get out of Raleigh with a victory.

Thanks to a hard-nosed, Northeastern football effort that featured 362 rushing yards the Orange did just that winning 24-10. The victory helps the Quest-O-Meter, which all helps us sleep better at night. 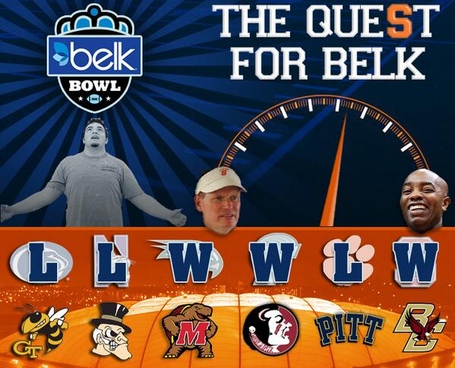 Looking at the remaining games left, this week's opponent Georgia Tech was roughed-up in Provo, UT by BYU, 38-20. This gives all a bit more hope we can maybe steal one this week in Atlanta. Meanwhile, Wake Forest is Wake Freakin Forest. Maryland is coming back down to earth a bit, even though, they still are 5-1 overall. Florida State is still going to probably rock our worlds at home, while Pitt and B.C. still doesn't scare us.

As you can see, the road to Belk is a bit more easier now that SU is 3-3 at the half mark. Hopefully, the trend upwards continues and Syracuse could be playing for something more than just Belk.