We are the champions, my friends.

Following the unveiling of the SB Nation Orange Eagle Trophy, all that remains for the 2013-2014 Orange Eagle competition is crowning the winner...and that winner is The Syracuse University Orange and Troy Nunes is an Absolute Magician! 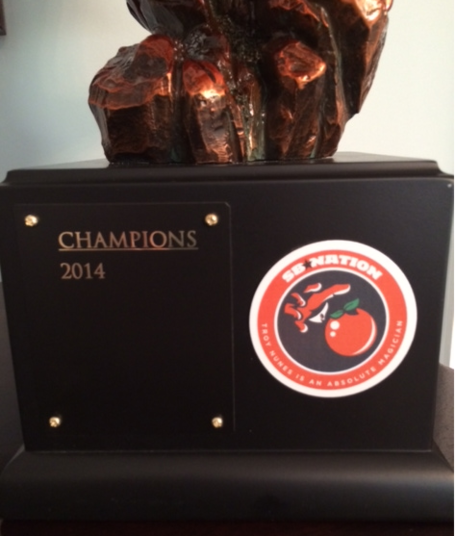 'Cuse started slowly in this year's competition, however our heroes and heroines in Orange dominated the late Fall and Winter contests between the schools -- managing a few great escapes along the way.  Starting with a sweep in the ACC Cross Country Championships, SU ran off 26 straight OE points and never looked back in winning the inaugural 2013-2014 Orange Eagle Trophy with points to spare.

The current points standings are 45-20 in favor of Syracuse...too big of a gap for BC to overcome.  BC can only earn 5 bonus points should their women's lacrosse team make an unlikely run to the national championship.  With Syracuse's men's and women's lacrosse teams still eligible for bonus points, the margin of victory may extend beyond 25 points.

While BC came up second best in the competition this year, there's plenty of optimism over at BC Interruption that next year's competition will be much closer.  First, BC dropped no fewer than 13 points when victory was firmly in their grasp including football, volleyball, tennis, and softball.  In addition, next year's football contest, worth six OE points, will be in Chestnut Hill, giving The Eagles a home field advantage for the match-up with the highest points total at stake.

Who were SU's star athletes that stepped up and came through when they were needed most?  Many of our finest contributed to this glorious victory, however a few stood out for their performances against the Eagles.  Among the honor roll are:

Kallie BIlladeau (ice hockey) - Having lost the first two Orange Eagle contests, Syracuse needed something to stop BC's momentum heading into a game against the Eagle's top-ranked women's ice hockey team.  What SU found to do the job was a five-foot-seven-inch section of Minnesota-bred brick wall named Kallie Billadeau.   The Senior goaltender saved her best performance of the season when it truly mattered with 43 saves in a 4-1 SU upset win over then #3 BC.  Billadeau's performance finally put 'Cuse on the board and set the table for a run that put the OE Trophy away for the Orange.

Martin Hehir (X-Country/Track & Field) - When presented with an opportunity to take the Orange Eagle lead on November 1st at the ACC Cross Country Championships, the SU men and women stepped forward and grabbed control of the Orange Eagle with a nine-point OE display that put 'Cuse on the front foot to stay.  Perhaps no-one played a starring role more than the third-year NYS product Hehir, who finished third in the men's race and paced the Orange men to the school's first-ever ACC title...earning SU an additional 3 bonus OE points!  Hehir also featured in the ACC outdoor tack and field championships, winning the 10,000 meters and finishing 2nd in the 5000 -- both grabbing Syracuse valuable points that defeated BC on the day.

Terrel Hunt (football) - Down 27-31 and in need of a touchdown, Hunt led the Orange on a 75-yard drive with 2:02 to play, running and passing through a completely confused and exhausted Eagle defense.  Hunt capped off the drive an eight-yard TD pass to Josh Parris with seconds left to play.  The resulting TD earned SU a critical 6 Orange Eagle points, shocked the Eagles, sent SU bowling, and ignited arguably the greatest ever end-zone dance by an offensive lineman.  Hunt was simply awesome against BC, tallying 372 total yards and 3 TDs in what hopefully will be looked back on as his true breakout performance as SU's signal caller.

Kayla Treanor (lacrosse) - BC's Orange Eagle hopes were starting to fade when SU arrived in Chestnut Hill for a top-10 matchup against the Eagles.  BC put up a strong challenge against the #2 Orange and led by one at the half, but the 5'9" Sophomore from Niskayuna was having none of it.  Kayla keyed a 5-1 scoring run early in the second half to put the 'Cuse up for good.  Treanor finished with a game high five points for the Orange.  The Eagles???  They were simply finished.

So congratulations to Syracuse and TNIAAM!  The 2013-'14 Orange Eagle Trophy Champions!  Enjoy basking in the glow of victory Magicians and get ready for the 2014-'15 season as we look to retain our title.  Be sure to check out Orange Eagle updates over the summer as the schedule is set and these two Northeast rivals lock horns once more.  But before you go, give us your thoughts below on who should be crowned as the 2013-'14 OET MVP!