Syracuse has dominated the 2013-2014 Orange Eagle competition to date, but BC just did the one thing that could take the shine off winning this thing. Thanks for that Eagles.

Well that was a real kick in the groin, wasn't it?

The agony of watching SU basketball manage The Great Escape over and over again these last two weeks should have taught us that no game these days is a sure thing. Playing inspired basketball for around one minute at the end of each game is not the formula for success and the bird literally came home to roost in the form of a BC Eagles team that was simply better than us last night. We should be able to deal with that, right? I mean, we have twenty-five wins, and one single loss, you guys...but still. Losing that way to THAT team...ugh.

That the victory may have handed BC an Orange Eagle lifeline merely adds a cherry on top of a poop-flavored sundae.

Down but not quite out

With The men and women trading points on the hardwood this week, the Orange Eagle remains very much in SU's favor at 31-12. A nineteen point lead with 16 head-to-head points remaining is likely insurmountable, however BC is still in with a chance if their men's and women's hockey teams (ranked #1 and #7 nationally) run the tables in the Hockey East and/or NCAA tournaments where up to 19 additional points can be earned. Should SU not match those achievement-based points in lacrosse or basketball, well...I'm saying there's still a chance. 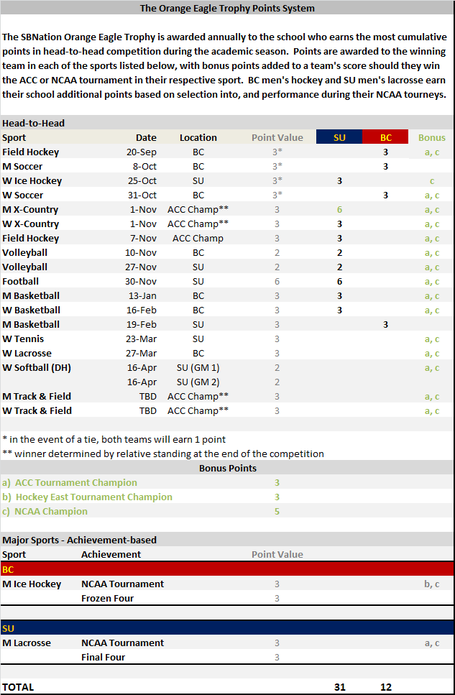