Orange Eagle Trophy: Come On Eagles! At Least Try to Win This Thing

It started as a friendly rivalry, but has turned into a showcase of sheer and utter dominance. Can BC pick themselves off the mat or is this well and truly "ovah"???

Share All sharing options for: Orange Eagle Trophy: Come On Eagles! At Least Try to Win This Thing

On November 30th, behind 19-9 in the Orange Eagle Trophy standings, Boston College's football team was seconds away from grabbing six crucial OE points and getting right back in this thing...

Terrel Hunt's last-minute heroics not only sent SU bowling but established what most pundits are saying is an insurmountable lead in the 2013-2014 Orange Eagle Trophy competition.  Indeed, Up 25-9, "experts" are weighing in on SU's domination:

The (Coulmbia, SC) State's Ron Morris:  "If I had to guess who will win between Syracuse and Boston College, I'd have to go with Ohio State."

HCSMFS:  "How many of you guys thought it was over when we were down 9-3?  Our kids didn't.  You know, when I first took the job here we talked a lot about character and what I like most about our athletes is their character.  Whether it's Kallie Billadeau making 43 incredible saves against the top-ranked BC Women's hockey team, Martin Hehir and Margo Malone leading the cross country team to nine points in the ACC cross country championships, or our volleyball team being five match points down and still finding a way to beat the Eagles, our kids delivered.

"The Orange Eagle is a war.  It's a war about character.  Never, ever, ever give up.  I don't care if it was women's soccer when we got our butts kicked or field hockey when we let ourselves down.  Our kids never quit.  They come back the next week and they're resilient.

"The first month we were beat up.  Beat up pretty good.  But it's been "the next team in" that's been our creed.  I don't care what your sport is or what your name is, If the soccer team falls, its the next team in and it's their job to get it done!  And these past two months have been a great example of the next team in.

(pauses to collect himself) "I friggin' love these kids and I friggin' love this University.  This whole group...character.  Fight the good fight, you play with integrity, and you find a way to win!  Any questions?"

Random Irritable Clemson Fan:  "Using the word "Orange" in your competition's name is an affront to Clemson!  If our great football coach Dabo Swinney wasn't such a gentleman, we'd go up there and destroy all of you with our stable of five-star recruits and superior knowledge of football!"

Powerful words from some of sports most powerful people...

So here we are...out in front, but with everything still to play for.  "Next team up" is men's basketball with a Monday date at Conte Forum against a 4-11 BC team that is playing as poorly as SU is playing well-ly.  A win plus three more points for The Cuse, and Sean Keeley can already put one white-gloved hand on the Trophy.  A loss?  Unthinkable... 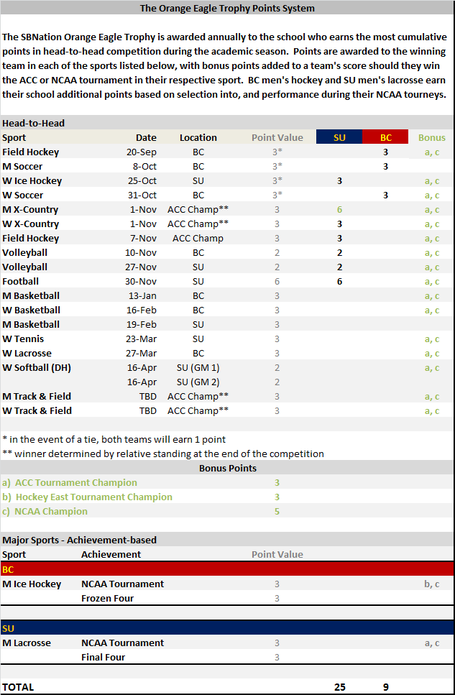