Not satisfied with simply being better than BC at exercising, SU lays down the hammer in field hockey and volleyball to extend the school's Orange Eagle Trophy lead to 17-9 heading into rivalry week with the Eagles

It's rivalry week all y'all!

With BC heading to town for a match up with our Orange in the Carrier Dome, a chance at bowl eligibility AND 6 more Orange Eagle points are on the line. Over the past month, SU has taken control of the OE points standings with some outstanding performances by our women's teams...both on the field and on the court. With a 17-9 lead established, let's recap how we found ourselves running riot over a clearly overmatched Boston College program.

With the pain of an early-season Orange Eagle defeat to Boston College still stuck in their minds, the Syracuse Orange Women's Field Hockey team descended upon the NCAA Field Hockey Tournament with a chance to advance to the tournament semifinals at the expense of their hated rivals. Over the past month, Syracuse flipped the script on BC with impressive victories in cross country, and ice hockey (let's just let that sink in for all the BC folks):

Those performances helped to earn Syracuse an impressive 12 OE points, and launch SU from being shut out to taking a narrow 12-9 lead in the competition. Now, with an opportunity to further the lead, and send BC's team home for the winter, coach Ange Bradley's ladies didn't disappoint! Indeed, despite an early deficit, Syracuse used a 13-minute, three goal first half barrage to subdue the Eagles 3-1, and show BC that, whether on ice or on land, our sticks are simply bigger and better than theirs! Orange heroes Leonie Geyer, Emma Russell, and Lauren Brooks all scored for the Orange, while goalie Jess Jecko made up for a rough game against the Eagles in their first meeting by making six saves, and earning her 16th victory of the season. BC goalie Leah Settipane proved to be up to the challenge with nine saves, but her heroine-ics weren't enough to prevent the loss of three more Orange Eagle points.

Momentum clearly was on Syracuse's side as the SU Women's Volleyball team travelled to Boston for a date with a BC Volleyball team who was anxious to stem BC's bleeding in the Orange Eagle. BC had not registered a win in ACC competition, but clearly the motivation of earning OE points spurred the Lady Eagles on to match the favored Orange kill for kill and dig for dig. The teams traded the first four sets, and remained tied at 10 in the fifth and deciding set when BC rattled off four straight points to set up match point, 14-10.

The BC crowd, aware of the Orange Eagle implications, howled in delight at the chance to get back into this, but like Michael Crabbe and the poor Cal Bears, BC waited....and waited...and waited...yet never did get back into it. With their backs to the wall, Syracuse reeled off five straight points, fended off a fifth match point, and at 15-14, used a combined block by Gosia Wlaszczuk and Monika Salkute to win the whole things and send the jubilant Orange back to S-town with another two Orange Eagle points in the bag!

So, with 8 matches completed, the current Orange Eagle standings are as follows: 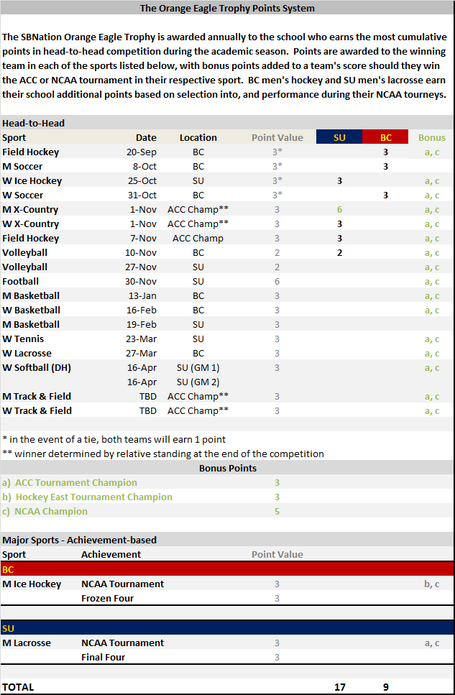 Syracuse is in command, but with 8 points on the line this week in volleyball and football, BC can get right back in this thing...or find themselves hopelessly out of this thing. Here's hoping for the latter! Please check back in again next week to see how our football and volleyball teams added to our growing lead!