Facing a 6-0 deficit, Syracuse starts taking this Orange Eagle Trophy thing seriously and posts a string of dominating performances to edge out in front of BC. It's truly GAME ON!

(October 25, 2013, Syracuse, NY).  Sitting in the home locker room at the Tennity Ice Pavilion in Syracuse, NY, SU women's hockey coach Paul Flannigan gathered his team together and delivered as passionate a speech as could be imagined ahead of the Lady Orange's game against 3rd-ranked and heavily-favored Boston College:

Great moments are born of great opportunity, and that is what you have here tonight ladies.  That's what you've earned here tonight.  One game:  if we played 'em ten times they might win nine...but not this game.  Not tonight.  Tonight, we skate with them.  Tonight we stay with them, and we shut them down because our men's soccer and women's field hockey teams couldn't get off their asses to put some Orange Eagle Points on the board!!!!

Tonight, we are the greatest hockey team in the world.  This is your time!  Their time is done.  It's over.  I'm so sick and tired of hearing BC Interruption tell us what a great program the Eagles have.  Screw 'em.  This is your time.  Now go out there and take it!

Spurred on by Flannigan's speech, the Orange scored the game's first three goals and rode the red-hot goaltending of Kallie "Ten Bill Save" Billadeau to produce the most shocking result in the Orange Eagle competition thus far, defeating the Eagles 4-1.  Syracuse played an efficient game on offense and used Billadeau's 43 saves to hold off the relentless Eagles attack.  Down 3-0, Kate Leary pulled a goal back for BC early in the third period, but SU's Sadie St. Germain grabbed back the momentum and SU's first three Orange Eagle points a mere 50 seconds later.

(October 31, 2013, Newton, MA).  With the Orange finally on the board, BC's women's soccer team looked to use home field advantage to restore their six point OE lead against an SU squad playing their final game of the season following elimination from ACC tournament contention.  The Orange came out of the blocks with an aggressive defensive approach looking to close space and reduce BC's possession.  The strategy worked well against most of the BC side, but the Orange had no strategy for defending 5'5" bundles of awesomeness...otherwise known as McKenzie Meehan.  The Sophomore, leading the ACC in scoring, netted early to give the Eagles a 1-0 advantage.  Syracuse answered back late in the second half to send the game into overtime, but in the 103rd minute Meehan popped up yet again to score the game ending goal...sending BC's supporters (and BC Interruption) into raptures, and SU back to Central New York 2-1 losers.

SU Cross Country takes matters into their own hands feet

(November 1, 2013, Kernersville, NC).  With Newton/Chestnut Hill, MA proving to be an absolute fortress for Syracuse athletes, the Orange cross country teams looked to the neutrality of rural North Carolia to launch an assault on Boston College's grip on the Orange Eagle.

First up, the men's competition.  With a strong start, and paced by Martin "Rudy the Rabbit" Hehir's third place finish, SU's harriers not only blew away the BC men, but won the ACC Championship in the process, earning SU a head-to-head 3 point victory, as well as a critical 3 bonus points (ACC Champions) in the Orange Eagle standings.  SU placed all seven runners in the top 25 finishers, while a normally competitive BC team simply had a bad day at the office, finishing 318 points behind the Orange.

Now tied at 9 a-piece, the Boston College and Syracuse women's cross country teams toed the line to see who would bathe their favorite SBNation blog sites in sporting glory.  And unlike the men's race, the women delivered a true nail-biter that will go down as one of the most competitive displays in this OE season.  BC started strong on the 6k circuit, with Liv Westphal setting a blistering pace, and her teammates sitting close with Syracuse's well-balanced team.  As the race entered the 2k split, BC held a slim 18 point lead over the Orange, but as the race went on, Syracuse's Margo Malone and Meredith Speakman stayed close to Westphal, while SUs #3-5 runners pulled away from their BC counterparts.  In the end, Westphal placed an impressive third overall, but the Orange team had too much for BC, defeating them by 43 points, and finishing in 3rd place among all ACC teams.

With the completion of the ACC Cross Country Championships, the Orange Eagle score now stands at Syracuse, 12;  Boston College, 9.   With everything still to play for, SU and BC take a short breather, before the volleyball teams face off in a home-and-home series of matches, followed by the eagerly-anticipated Thanksgiving weekend football clash in The Carrier Dome.  The full standings table are below.  (UPDATE:  The OE Rules Committee, following feedback from you, the fans, has made a correction in the points system.  The football and basketball match-ups, previously earning a school 10 and five points respectively, have had the points totals reduced to 6 and 3.  The move was voted upon to offer greater parity with all sports). 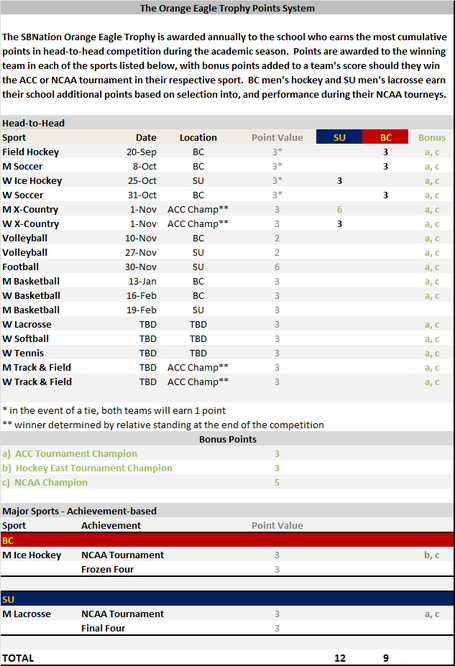