The Syracuse Men's Soccer team travelled to Boston to even the Orange Eagle Standings at three apiece, but came up empty-handed as BC takes an early 6-0 lead in the race to the Trophy.

Share All sharing options for: Orange Eagle Trophy Update - Men's Soccer Fails to Put SU on the Board

On Tuesday afternoon, in front of a partisan home crowd, the Boston College Eagles soccer team defeated the Syracuse Orange 3-2 and grabbed yet another three points in the Orange Eagle Trophy Standings. It's still early in the contest, but our Orange heroes and heroines better damn well get their act together, as let's face the cold hard facts Magicians...we're getting shut out!

BC, clearly understanding the weight of the rivalry, jumped all over SU early and notched two goals in the match's first eight minutes, with Eagles' Diego Mendez-Melina Prominently-Involved in Both-Scores. Not to be deterred, SU's 19-year-old Norwegian sensation, Emil Ekblom pulled a goal back on either side of halftime to level the scores and give SU fans hope of pulling a classic "smash and grab" job in Chestnut Hill.

But our hopes were quickly dashed. Immediately after the tying goal, SU coach Ian McIntyre inexplicably substituted Durrell Eskridge and RiShard Andrerson into the game in an attempt to bolster the SU defense. Yet in the 58th minute, Boston College's Nick Butler predictably raced past both defenders on a set piece and scored the game winner with Eskridge and Anderson nowhere in sight.

So, with two contests down, and everything still to play for, the Orange Eagle standings are as follows: 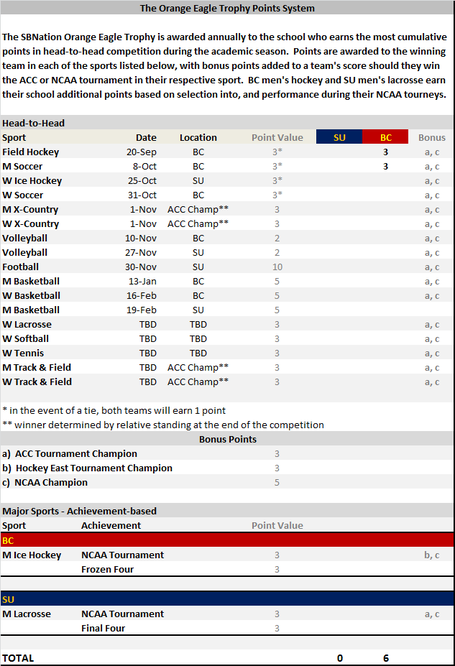 Next up is the SU Women's hockey team's home match against the formidable Lady Eagles on October 25th, followed immediately afterward by yet another trip to Chestnut Hell when our women's soccer team dresses up for Halloween as Winners, and brings SU back to level terms with the hated Eagles.