Get To Know Your Orange Man - #23 Prince-Tyson Gulley

PTG is set to embark on his senior season after a huge performance in last year's Pinstripe Bowl.

Share All sharing options for: Get To Know Your Orange Man - #23 Prince-Tyson Gulley

2013 Projections: Gulley is listed as a co-starter at halfback along with Jerome Smith. While we don't know much about George McDonald's mysterious offense, I don't expect much to change in terms of how our backs are used. I wouldn't be shocked if Syracuse gets two 1,000 yard rushers this season if everyone stays healthy.

How'd He Get Here?: PTG chose SU over Kansas, and like 45 MAC schools. There are 45 MAC schools at this point, right? I haven't been keeping track of realigment.

What'd Scout/Rivals Say?: Two from those sites, and three stars from ESPN.

Money Quote: "Me and Jerome, we talk about it all the time," Gulley said with a smile, "that we could definitely be the best backs in the nation, a two-headed monster." 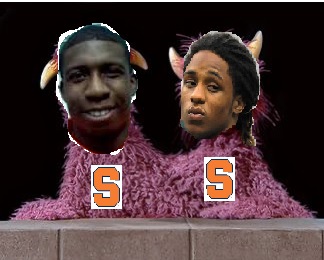 Links of Wonder: For more on how awesome Syracuse's running backs are, click here.

What Does Shafer Think: For whatever reason I'm struggling to find a Shafer quote on PTG, though I'm sure there are plenty out there, so here's RB Coach DeAndre Smith on his senior back:

"Real smart kid, that's the one thing that jumped out about Tyson," Smith said. "He really loves the game, really knowledgeable, so I'm fired up about that."

Interesting Nugget O'Interest: Between the addition of 'Prince-' to 'Tyson Gulley', and the George Morris II(I) confusion, I'm pretty sure all Syracuse running backs must clarify or somehow change their name while on campus. Back in Delaware I've heard they call Jerome Smith "Jeremiah Smythe, Esq."

Let Us Get a Good Look Atchya: How many Youtube videos about PTG can you post in 44 seconds GO GO GO

Tyson Gulley "On The Couch" (via Desmond McCoy)

And for good measure, here's the whole Pinstripe Bowl, because why not?