The big game is here. Need we say more?

Share All sharing options for: Syracuse vs. Georgetown: 'A Big (Mother F$&@!#*) Deal'

Much like an important game in March, Syracuse Orange fans woke up this Saturday morning to a different kind of feeling in their gut for a regular season contest at the Carrier Dome.

That's because for the last time as a Big East Conference foe, the Orange's long-time rival the Georgetown Hoyas will visit The Loud House (4 p.m. ET on CBS), which will be packed with a NCAA on-campus record of 35,012 fans.

On Friday, head coach Jim Boeheim spent 9 Good Minutes (not 5, mind you, 9 because James Arthur Boeheim makes his own rules) with ESPN's Pardon The Interruption crew, Mike Wilbon and Tony Kornheiser, to talk about the Syracuse-Georgetown rivalry and the special day, which he called, "a big (mother f@$*#&%) deal."

The showdown is such a big deal that Syracuse University has posted a DEFCON One traffic warning and students have been camping out for days.

Their dedication was rewarded with coffee and donuts delivered by a man, a myth and a legend on Friday. 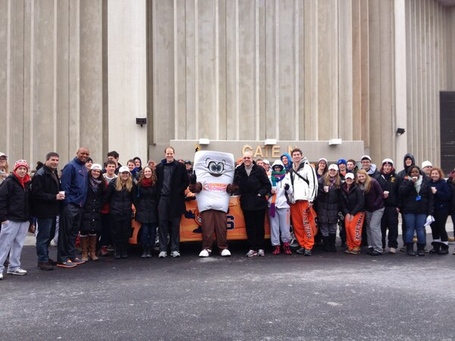 The sea of Orange fans attending the game will also witness the return of Carmelo Anthony, who will have his No. 15 jersey raised to the rafters at halftime.

The ceremony is suppose to be an anniversary celebration of the 2003 National Championship team, as Gerry McNamara (now a SU assistant coach), Josh Pace, Craig Forth, Jeremy McNeil, Josh Brooks, Matt Gorman, Andrew Kouwe and Gary Hall all plan to attend the event, according to The Daily Orange's Mark Cooper.

A few days ago, 'Melo published a video on his official website, about his return to Syracuse on Saturday.

If you need anymore of an indication that this game is a big deal, well, just look at the video playlist of CBS' The Tim Brando Show.

In reality, this will be the first of two meetings between the two rival fan bases, as on March 9 the duo will meet at the Verizon Center is the final regular-season contest of the season.

However, if Syracuse were to win today and the world ended six hours after (because we should get some time to celebrate), I think most of #OrangeNation would be satisfied with their lives.

If you're looking for a place to live-stream the game, here you go.

If you need some ampage before the game, check out this - it is pretty fitting if you ask me.

Have fun and be safe everyone, but must importantly GO ORANGE!