Share All sharing options for: Closing Bell and Open Future: Syracuse to the ACC Becomes Official in New York City

Syracuse fandom comes with a certain sense of constant tension. I wasn't around for Keith Smart or the original ACC dalliance, or numerous other events on and off the fields and courts that have left Orange fans looking for the proverbial "other shoe", but I'm still keen on listening for the sound of the 'drop'.

Yesterday's ceremonial welcome to the ACC for Notre Dame, Pittsburgh, and Syracuse was sort of corny in a very "tourist in Times Square" way (just look at Boeheim's face the whole time), and it was light on any actual news, but damn, it was satisfying to walk into the NASDAQ MarketSite and see video boards playing C.J. Fair and Kevin Rice highlights mixed in with those of Duke Johnson and James McAdoo... to see a Syracuse flag standing proudly next to that of Wake Forest and Florida State the other schools that we've been waiting to join for almost two ten years now.

It was a relief to see Syracuse finally, officially, welcomed into the conference. No shoe would drop on this move. 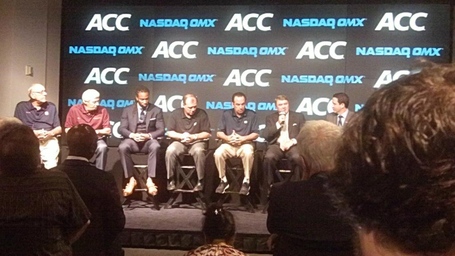 The conference started with John Swofford, joined by Jim Boeheim, Frank Beamer, Jimbo Fisher, Mike Brey, and Larry Fitzgerald, answering some pretty basic questions, and fitting in the standard ACC talking points: that 55% of the US population will fall within the ACC footprint by 2030 (Swofford loves him some #footprint), the ACC basketball conference is the greatest thing in the history of things, etc.

-Swofford stated that as a group, the conference has the highest average ranking in US News & World Report among the five power conferences. During the throes of expansion I made a big spreadsheet with a bunch of data in preparation for a post I didn't end up writing (but may one day!), and looked this up, and it's true, although the league falls fractions behind the Big Ten when it swaps Maryland for Louisville. After those moves are made, this is what we're looking at:

-Brey said that the ACC should be the league competing for 8-10 bids in the NCAA Tournament now, which is true. Some of the middling schools have some work to do to make the higher end of that number happen, but after seeing Miami take a leap like they did last year, anything is possible with good coaching and a few key recruits.

-Boeheim, on an ACC fan experiencing the Carrier Dome for basketball for the first time: "...Well, they'll see a lot of people." Classic Boeheim.

-Boeheim, on the new coaches coming to ACC basketball: "I know the coaches going in, Mike, and Jamie at Pittsburgh...and Rick...somebody at Louisville" Classic Boeheim.

-From the sound of it, the ACC tournament at MSG is going to happen. Swofford and Brey both sort of skated by the question, with Swofford saying it is ultimately up to the member schools and seeing what can be worked out with ESPN and the facilities, but he discussed the rich traditions of the ACC and all of the opportunities that the new schools bring to the league. There is a reason this conference was in Times Square. New York City is a major college sports battleground and the ACC has firmly planted its flag. If they can land the conference tournament at the Garden, and it resembles the spectacle that the Big East tournament was in its heyday, that would land a B1G blow.

After the presser, everyone broke off for individual interviews. Boeheim got a ton of attention.

On the importance of Syracuse keeping a major presence in New York City:

"The East coast — New York, Philly, Washington, those are key... we're going to obviously play games here in New York, probably every year, in Philly most every year, that's something that's important to us."

On the possibility of the ACC tournament being played in New York:

On the ACC as a fit for Syracuse:

"It's different now than it has been. Six or seven schools played in the Big East, it's not one school going in. It's really a combination of the two leagues, it's not one or two schools going into the ACC."

The "did the ACC make you think about retirement" question, because obviously someone asked it:

"I never make those kinds of decisions based on the league. When I retire it will be because I think it's time to retire, it won't be because of what league we're in or what's going on outside. The Big East changed many, many times dramatically while I was in it and I didn't retire, so it's just another change, and it will have no effect."

The significance of yesterday for Syracuse:

After a lot of lingering, the party moved downstairs for the ringing of the closing bell. The fifteen ACC mascots were already in the room, most of whom were hanging out along the outside perimeter, while Otto socialized as he is wont to do. 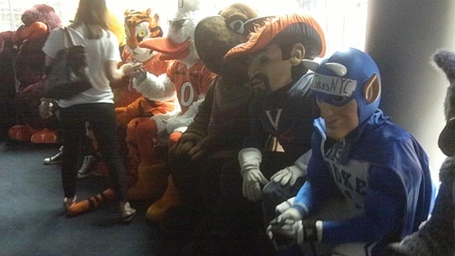 The Demon Deacon is very accusatory. 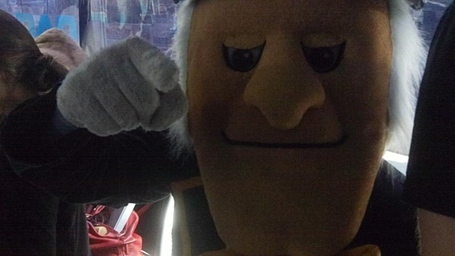 8-Ball stared at me like this for ten minutes. I can no longer sleep comfortably. 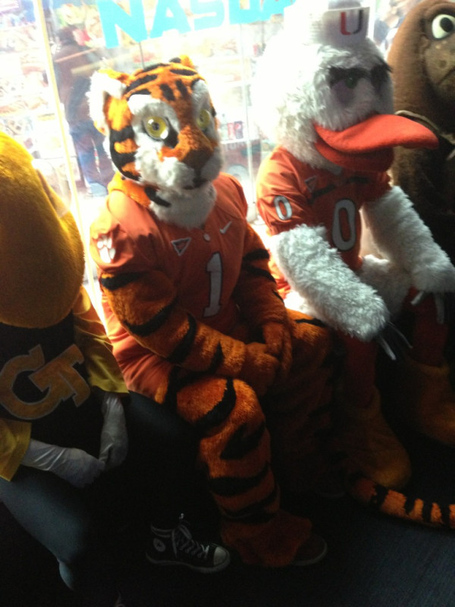 The schools with representatives (SU, ND, Pitt, FSU, VT) each went and took pictures with the bell before the big group shots. Syracuse sent Otto and a number of cheerleaders up. Jim Boeheim made a face. 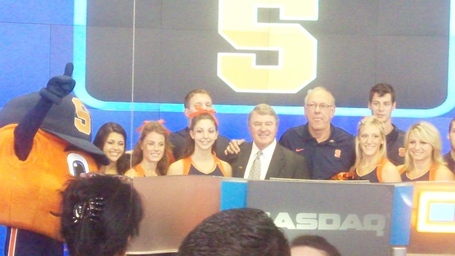 And then at the end, the ACC rang the bell. Everyone cheered for a while. Otto and Buzz, the Georgia Tech mascot, got jumpy. I'm not sure what Testudo tried to do to the Demon Deacon, but it sort of resembles (insert sport that Maryland is good at and Wake Forest is bad at, I'm not quite up on my ACC humor yet) season.

It was not the most exciting day in New York, but as a culmination of 22 months of waiting and speculation while the rest of the college athletics landscape threatened to reshuffle, I was thrilled that this day had finally come. At long last, Syracuse is home, and it feels good.