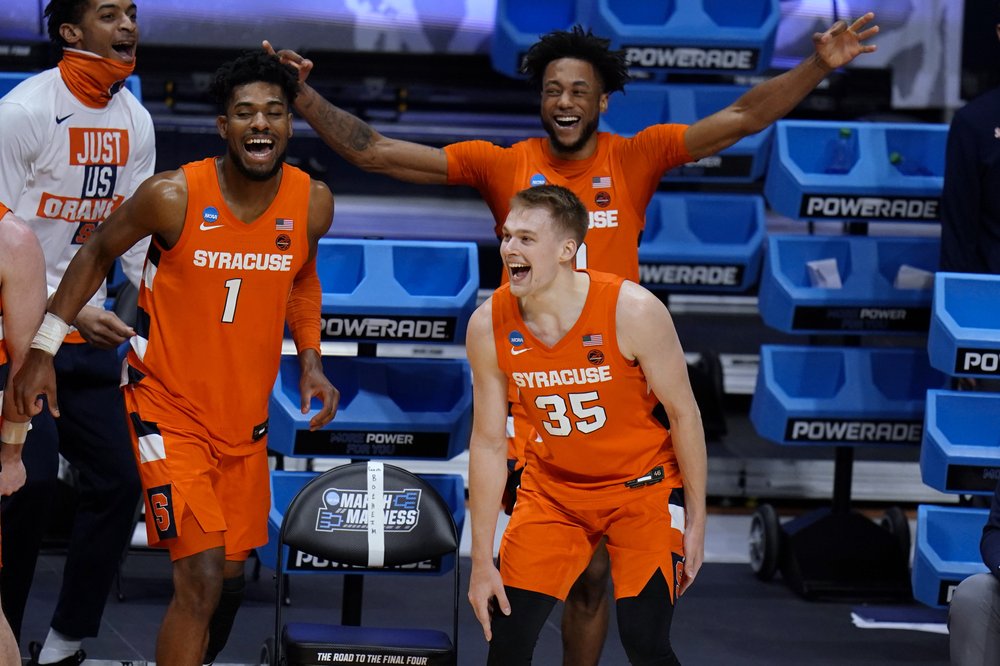 Syracuse extended its stay in Indiana with a thrilling, heart-pumping 75-72 win over West Virginia on Sunday night, giving the program another Sweet Sixteen appearance in its storied NCAA Tournament history. The Orange program has tallied 66 all-time March Madness victories, tying it with Indiana University for seventh all-time. Yet, Syracuse's recent success hasn't come as a high-seed — it's been as the double-digit, underdog seed.

Syracuse has notched nine wins as a double-digit seed (10-seed or lower) over the last five years, including two wins in this year's Sweet Sixteen run, three wins in 2018's Sweet Sixteen run, and four wins during the program's 2016 Final Four run. These unlikely runs give the Orange the second-most wins all-time as a double-digit seed, behind only Gonzaga and Dayton, who each have 10. There have been other double-digit seeds who have advanced to the Final Four before, including LSU in 1986, George Mason in 2006, VCU in 2011 and Loyola Chicago in 2018. However, many of the programs who have thrived as double-digit seeds have failed to reach such a consistent, high-level string of March success as the Orange has.

As mentioned, Syracuse is now up to nine total wins as a double-digit seed, breaking a four-way tie that included Texas, VCU and Richmond, who each have eight. Texas achieved most of its success as a double-digit seed during the 1990s, including one run to the Elite Eight in 1990 and Sweet Sixteen in 1997 under Tommy Penders, but the Longhorns have never made a Final Four as a double-digit seed. Richmond has arguably the biggest upset of this group with its 1991 win over #2 seed Syracuse, but the Spiders never made it past the Sweet Sixteen during a five-year run from 1987-1991 under Dick Tarrant. VCU's success is tied primarily to its 2011 run to the Final Four, in which the program notched five NCAA Tournament wins during the illustrious stretch, but the Rams program never got past the Round of 32 in subsequent seasons under Shaka Smart. An honorable mention program is LSU, the first team to reach a Final Four as a double-digit seed in 1986, in which they beat a #3 seed, #2 seed and #1 seed in successive matchups. The Tigers made it back to the Elite Eight in 1987, but failed to get past the first round in two following double-digit seed NCAA Tournament appearances under Dale Brown.
Dayton, one of the co-leaders with Gonzaga, has two Elite Eight runs as a double-digit seed, but those runs were exactly 30 years apart — in 1984 and 2014. Meanwhile, the Bulldogs have one of the more comparable stretches to Syracuse of any program. In three straight seasons from 1999-2001, Gonzaga reached an Elite Eight under Dan Monson and two Sweet Sixteens under current head coach Mark Few. The Bulldogs have become one of the elite teams in college basketball since those turn-of-the-century runs, with just one double-digit seed appearance in the NCAA Tournament over the last decade — a 2016 Sweet Sixteen run that ended with a loss to Syracuse.
While LSU and Gonzaga have the most similar stretches of high-point success as double-digit seeds to this Syracuse program, what sets the Orange apart is the program's winning percentage in such situations, while also in such limited appearances. The Orange has been a double-digit seed program just three times in its history, while all other teams in consideration have more appearances. In addition, Syracuse has yet to lose prior to the Sweet Sixteen as a double-digit seed, while each of the programs mentioned in this article have failed to get past the Round of 64 at least twice. Syracuse also, by far, has the best winning percentage out of the teams mentioned in this story:

* = Did not count VCU's no contest result as a 10-seed against 7-seed Oregon in this year's NCAA Tournament.

Syracuse has particularly thrived in the Tournament as an underdog due to its 2-3 zone, which has stifled opponents that typically are not accustomed to facing head coach Jim Boeheim's signature style of defense. During its Tournament runs, the Orange has forced opponents to resort to shoot challenging three-pointers, allowing Syracuse to dictate the game flow. In 2016, the Syracuse defense limited Tournament opponents to shooting 32 percent from 3-point range on 21 attempts per game. In 2018, the number of opponent 3-point attempts rose to 28 attempts per game, but the percentage dropped to just 24 percent. In 2021, the number of opponent 3-point attempts has risen again to 33 attempts per game, while the percentage remains at a meager 33 percent.

Even in the games that Syracuse lost during these Tournament runs, their defense still covered the 3-point line well against familiar ACC foes. In the Orange's Final Four loss in 2016, UNC shot just 24 percent from 3. In Syracuse's Sweet Sixteen loss to Duke in 2018, the Blue Devils shot just 19 percent from 3. In all three respective Tournament runs, West Virginia on Sunday was the only team to shoot better than 40 percent from 3-point range against the Orange. Yet, Syracuse still escaped with the win due to limiting the Mounaineers' effectiveness inside, by blocking six shots and holding West Virginia to just 34 percent shooting inside the arc.

The 2021 Syracuse team has one distinction compared to its 2016 and 2018 double-digit seed predecessors, though: 3-point shooting. The 2016 Orange shot 35 percent from 3-point range, while the 2018 Orange shot just 27 percent from long distance. However, the 2021 Orange have shot an astounding 50 percent from 3-point range — led by Buddy Boeheim, who is averaging 27.5 PPG and shooting 56.5% from behind the 3-point line in this year's NCAA Tournament. If this year's Syracuse squad can keep up its hot shooting and strong defense, it might be Jim Boeheim's best double-digit seeded team yet, paving the way for even more March magic.

(All statistics and results recorded via Sports-Reference)