New York Times style writers @AaronGoldfarb and @HoyaSuxa are here to critique the threads that you're probably wearing in public like a damn menace.

With the announcement of Syracuse's spite festival with Connecticut set to take place in Madison Square Garden later this year, Aaron Goldfarb and Hoya Suxa had a Twitter exchange that went as follows: (1) Huckleberries that don't live in New York City will be amped to claim New York City as their team's deeded ownership (when we all know that this is a Rutgers town); (2) Rubes that don't live in New York City are going to give awful Times Square restaurants their biggest business of the year since shit heels from Iowa showed up for the Macy’s Thanksgiving Day parade; and (3) We're going to soon see a ton of outdated Syracuse basketball shirts (likely tucked into dad jeans) clogging the bars along 33rd Street.

So, that's how we got to here: A critical analysis of the most obsolete Syracuse basketball t-shirts Orange fans still wear, an important study of what happens when the primary industry of Syracuse, New York is the commemoration of events in wearable form. And this isn't to say that Central New York folks are the only ones wearing outdated shirts — this is a plague that seems to inhabit the souls of Syracuse fans located throughout the country, infecting those that live in New York City and beyond (Russia?). We picked six of the most likely candidates to currently be witnessed in the wild — likely covering a torso connected to an arm connected to a bottle of Labatt Blue Light — and determined: 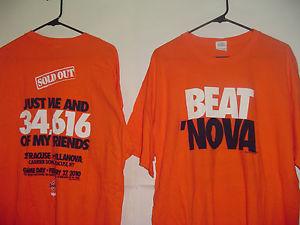 Should I Wear This Shirt Outside My House?: Yes, if you're walking directly into an open grave into which you will be buried alive.

Obsoleteness Factor: The minute the game was over this shirt should have been burned in a nuclear fire.

Suxa: You don’t have 34,616 friends if you still wear this shirt. You have imaginary friends that are plotting your demise.

Goldfarb: I was at that game and, even then, I remember thinking, "Buying a shirt you can only wear to one game is probably not a good financial decision." If I only knew then that most fans would get a good 200 wears out of this sucker. 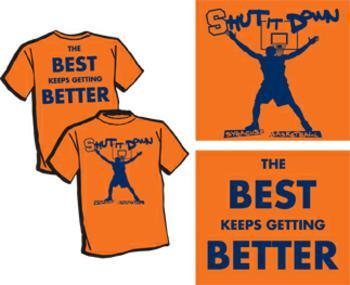 Should I Wear This Shirt Outside My House?: No, unless you live in Nebraska and you're just now hearing about the Black Eyed Peas.

Obsoleteness Factor: The shadowy basketball player illustrated on the shirt may as well be a cold case chalk outline.

Suxa: "The Best Keeps Getting Better" is what I say about myself when I wear this shirt to my favorite bar (Applebee’s) and drink high class cocktails (Ecto Cooler margaritas) while having sophisticated conversations ("What do band aids taste like?")

Goldfarb: Remember when we had a freestylin’ rappin’ assistant coach? No, I’m not talking about Bernie Fine. 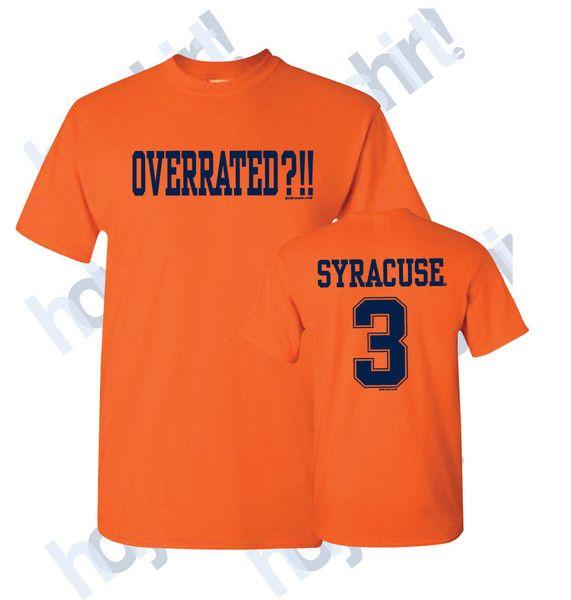 Should I Wear This Shirt Outside My House?: Yes, but only if you're headed to prison and want to make a misplaced political statement about statutory sentencing guidelines.

Obsoleteness Factor:  If you’re still wearing this shirt, most other people are rating you quite properly in their own heads.

Suxa: If you wear anything with excessive punctuation on it you should be brutality beaten by the grammar police. People will gather to protest not the way the grammar police put you in a headlock and gave you noogie after noogie followed by an off-the-book swirlie, but rather to make a statement about the way that you wore something that exceeded the standard for aiding interpretation. You are a punctuation monster for wearing this a decade after it was relevant.

Goldfarb:  You know, he kinda was overrated. 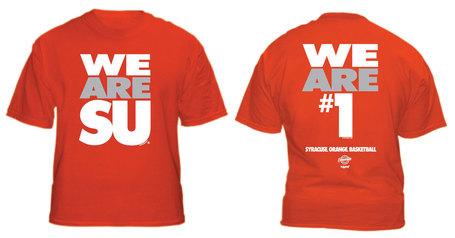 Should I Wear This Shirt Outside My House?: Only if you’re currently so suicidal this shirt is the self-esteem boost you need to get through another miserable day.

Obsoleteness Factor: Are we currently #1 this very damn second in time? No. Then don’t wear the shirt.

Suxa: I kind of like the fact that the shirt was presumably concocted by an immigrant repeating phrases spit at him by a bored learning annex English instructor. "I want ham. Put on sandwich." "Funky fresh threads, my man." "I'm from New Jersey." Otherwise, keep it around only if you plan to douse it in gasoline, stick it in your ex-girlfriend's gas tank, and light it on fire.

Goldfarb:  I’ll never forget when Pitt won the CBI tournament in 2012. (That’s the poor man’s NIT if you didn’t know.) Yet several Pitt players, upon accepting the trophy, sadly raised their index fingers in the air. No, they weren’t #1, they were like #115. That’s what you look like when you wear this shirt nowadays. 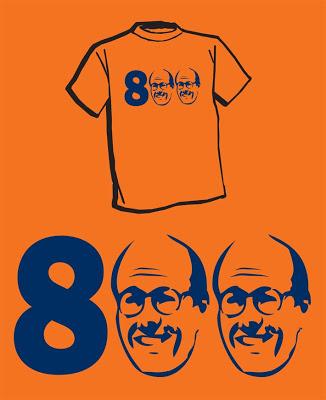 Should I Wear This Shirt Outside My House?: Only if Fab Melo causes Jimmy B to somehow vacate even more games.

Obsoleteness Factor: I bet Coach doesn’t even allow his "help" to use this shirt to wax his car.

Suxa: I think my biggest problem with this shirt is that it presupposes that Boeheim has human emotions that cause him to smile. 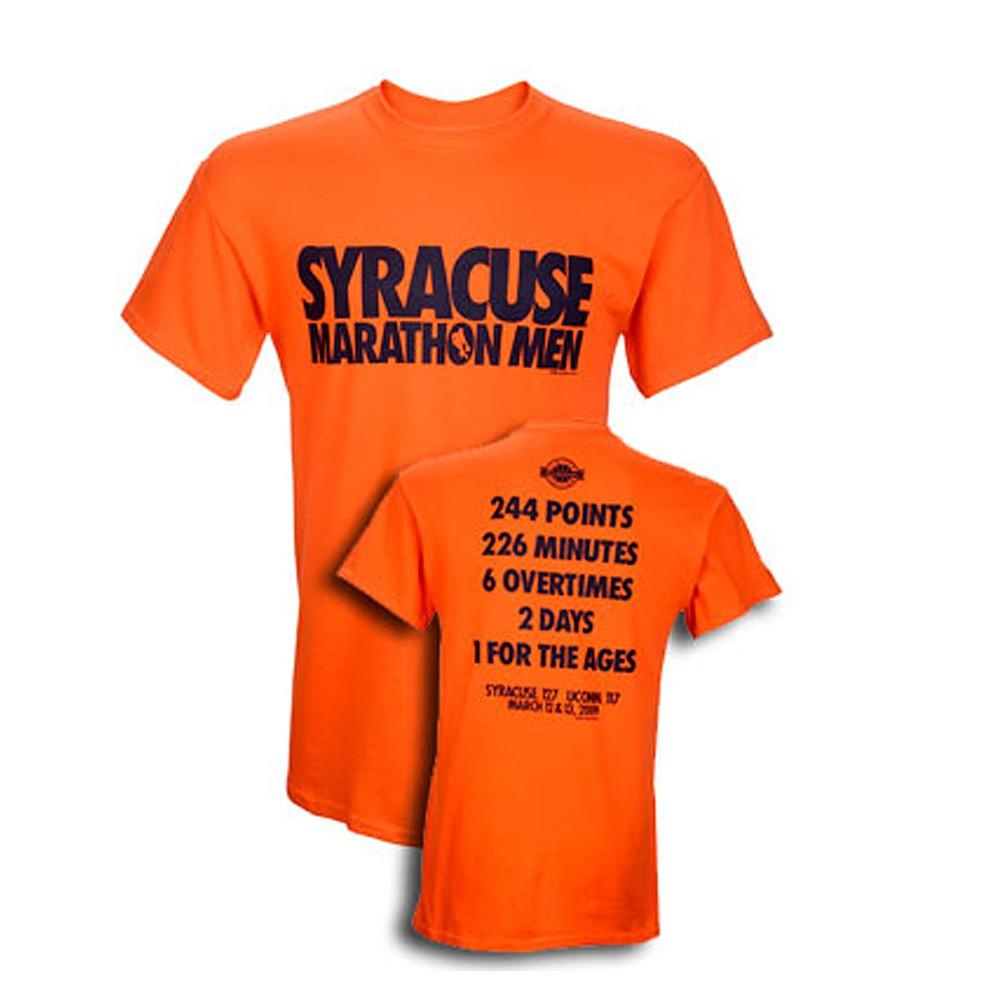 Should I Wear This Shirt Outside My House?: Only if, for some reason, there is some UConn fan you want to remind of the time their team somehow got blown out by double digits in a sextuple OT game.

Obsoleteness Factor: As obsolete as that 6OTs.com URL you snagged on GoDaddy while exiting the Garden that night.

Suxa: I think there is a very specific occasion to wear this shirt: When you’re testifying on your own behalf after being ridiculously sued for urinating on Jim Calhoun’s front lawn while singing the Syracuse fight song. Face your accuser in style and schadenfreude.

Goldfarb: The only thing more remarkable than the 6 overtimes is the fact this shirt has made it through several hundred wash cycles without the color fading.