ACC Football Power Rankings: "Can Your Coach Buy a Properly-Fitted Pair of Khakis?"

Our weekly power rankings of things that happen off the field in the ACC starts with a critical question...

Share All sharing options for: ACC Football Power Rankings: "Can Your Coach Buy a Properly-Fitted Pair of Khakis?"

Everyone ranks things. But we want to get to the things that really matter. No, not on-field results -- those are far too subjective, and also too depressing for Syracuse fans at times. No, we want to use our unquestionable* authority to rank the OFF-the-field issues that truly matter in the ACC. This will probably happen every week.

*Dispute this at your own risk.

Can Your Coach Buy a Properly-Fitted Pair of Khakis?

Football coaches are rarely a fashionable group, which can be strange, at times, given the salaries these individuals make. The ACC's coaches are no different either, ranging from "hey that's a nice pair of slacks!" to "these are tan, I'll put them on!"

The full group of 14 ACC football coaches can be found in the photo below. Consult links for the Atlantic and Coastal division photos to see those groups broken out. 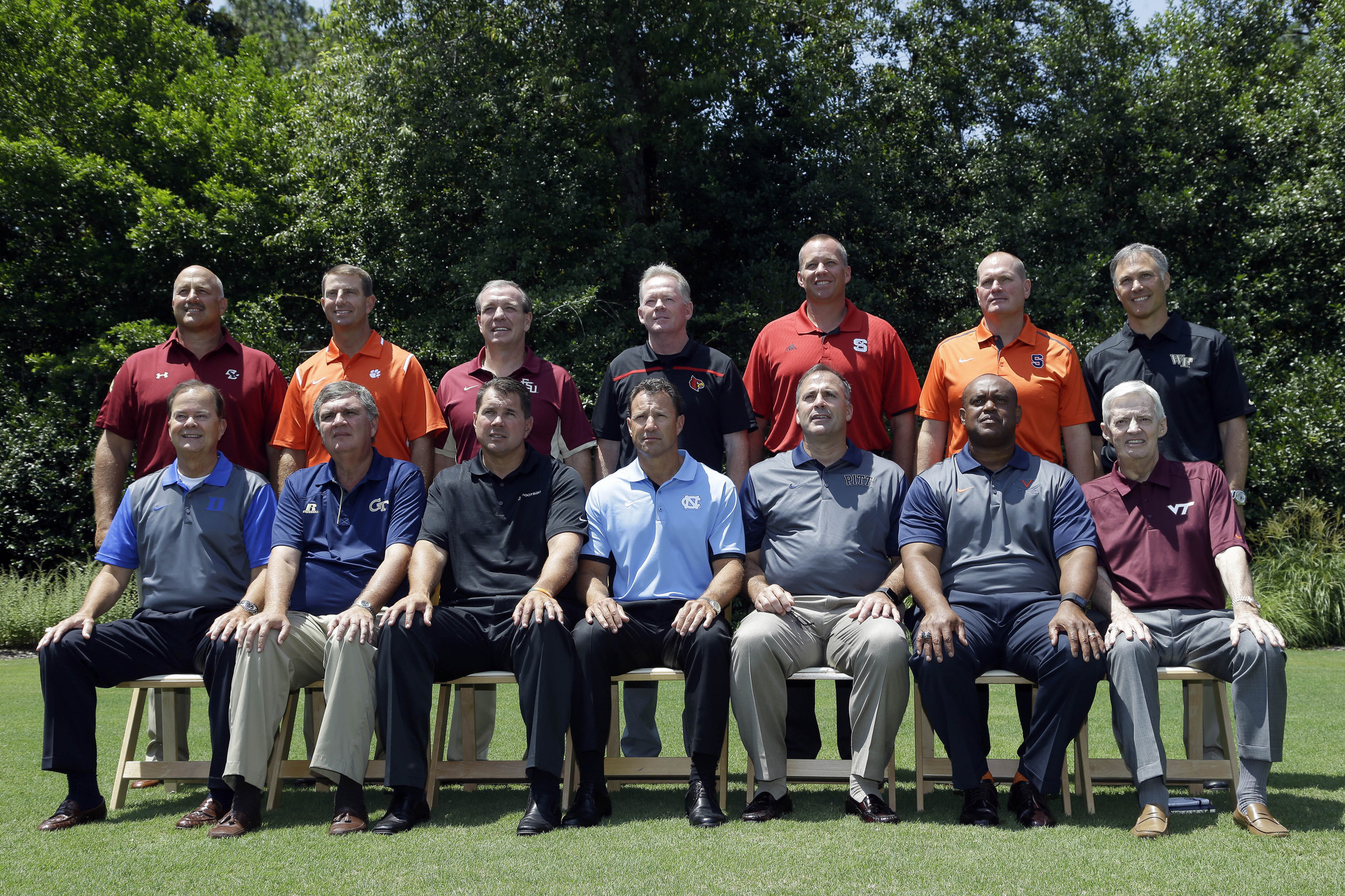 1. Larry Fedora, North Carolina: It's sort of common sense that the ACC coach in the best shape would be most concerned with his general appearance... and fit of khakis. Non-pleated black slacks don't really bunch at the bottom and even go with UNC's color scheme.

2. Frank Beamer, Virginia Tech: You'd think the elder statesman of the group would have the least fashion sense, but instead, Beamer goes for 70s Dallas-looking gray slacks and the gray-light brown combo with his leather. You could easily see a cowboy hat and cigar in his photo too, if you wanted. But even without, the guy's still got it.

3. Scott Shafer, Syracuse: The Atlantic Division leader goes simple and dark. Slight bunching at the bottom. but overall, non-pleated and they seem tailored enough. Dark pants are also slimming. Overall, Shafe looks well put-together and is certainly able to buy a pair of khakis for himself.

4. Bobby Petrino, Louisville: Petrino also goes for the gray-slacks look like Beamer, but pairs with black instead. Similar fit to Shafer, with a flat front and minimal bunching. Like Beamer too, he's a little older than most of his cohorts, yet pulled off something simple that works for his general image/demeanor.

5. David Cutcliffe, Duke: Those blues don't match Duke blue, and this is the first pleated appearance on the power rankings, but Cutcliffe -- another one of the older coaches -- does seem to know how to buy a pair of slacks that fits him well. You'll notice a theme that dark pants worked better for most. Nice job, Coach Cut.

6. Steve Addazio, Boston College: The first light khaki entry on the list. Addazio's "Be A Dude" mantra doesn't mean he can't find himself a good, sturdy pair of pants, as the coach -- despite being bigger than most of the others in the conference. Fit is not about how "thin" you are. It's just about how they fit you. 'Daz passes that test here.

7. Mike London, Virginia: More pleats, but London is largely able to make them work, and the dark blue matches UVa's color scheme. London is a likeable and straight-forward guy, and for some reasons, the pants selection reflects that. Don't challenge me on this. I know what I'm talking about.

8. Dave Clawson, Wake Forest: Some pleats, some bunching and a belt that doesn't quite fit/find itself at the top of the waist line. Dave didn't fail by any means. But they seem like they're "just pants." I don't know how else to describe them. Maybe a shade or two tanner would've gone better.

9. Dave Doeren, NC State: That's some bunching and a whole lot of space on the side there, coach. You don't want to be swimming in your slacks. Just want them to lay to the sides and allow for movement. Not at all the worst miss by a coach, though. A little less room in the leg and these work just fine.

10. Al Golden, Miami: For a school that built itself on #BRAND, Miami's is really downplayed by Golden here. The all-black look is typically slimming yet doesn't necessarily do that here. Plus, no way Al was enjoying the sweltering heat there either. Less room on the sides of the pants could've made a big difference.

11. Paul Johnson, Georgia Tech: A whole lot of space in these, and you can't use age as an excuse given the entries above hi -- "I don't give a shit how my khakis fit, you clown in your mom's basement. How many college football games have you won?" - Paul Johnson.

12. Pat Narduzzi, Pittsburgh: In his first go-around at the ACC Football Kickoff, Narduzzi has a long way to go. The parachute pants look doesn't really help him out much, and there's a ton of pulling along the front. With Pitt's color scheme, he could've easily gone for a darker, better fitting pair of pants.

13. Jimbo Fisher, Florida State: Jimbo, you're a pretty rich and successful guy. You can certainly find a way to get a better-fitting pair of pants than this. Wide-leg all the way down, and a ton of bunching at the bottom. Leather doesn't match either, which is not about pants and just about "hey, that's important."

14. Dabo Swinney, Clemson: Dabo walked into his local shop and said "hey these are tan!" and then walked out with the first pair of pants he saw. Wide, straight leg and pleats. These do not fit in any way, shape or form. Dabo's not a big guy. These pants were made for someone larger than him. Someone buy him some new pants, please.

There are exceptions, of course, but overall, it seems like wins were inversely related to how your pants fit for many coaches. Fisher and Swinney being at the bottom of the list sort of hammers this point home, and you have to wonder if there are places to buy pants within driving distance of those campuses (I mean, there have to be, right?!). The older crowd, save Johnson, doing well was a surprise. Overall, I'd say that six or seven ACC football coaches definitely know how to buy khakis, and the rest have some work to do.

What do you think? Happy with your coach's khaki choice. Want to buy them a pair to help the cause for next year? Share your slacks-related thoughts below.