The Cooney Face Chronicles: A Retrospective

Let's take a look through the historical context of the Cooney face.

Share All sharing options for: The Cooney Face Chronicles: A Retrospective

The #CooneyFace has been around since the dawn of time. Actually it hasn't. It's been around since Trevor Cooney's inception -- August 1992 -- but that's beside the point. The physiognomy itself is something many men have only attempted to describe, but ultimately fell short. There just may not might be a fine enough brush to paint the picture of what the Cooney Face is. 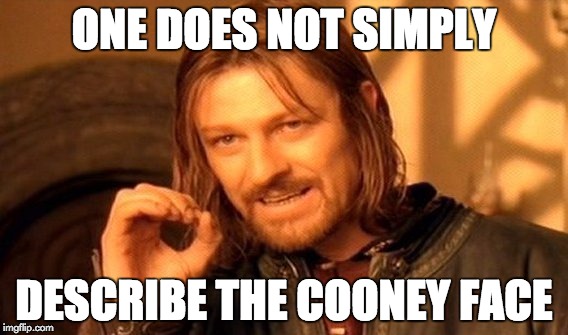 In this case, we see the Cooney Face in it's most basic form (pre-Syracuse era). The face has not yet reached its peak, but oozes with potential.

Here is the Cooney battle cry face. This means Trevor (or Tyler, Terry, Gerry and the like) is ready for war.

The Falcoholic said it best, almost comparing the above face to a fine Oregon Pinot Noir.

Now we devle into the meat and potatoes of the Cooney face. This is the deceptive Cooney Face. The, "I'm going to pull up for three with a hand in my face while smiling and bury this on you" face, if you will.

The Cooney Face has taken on many forms throughout its maturation. In this instance, the face is portraying determination. It's almost as if Cooney were saying to himself, "Oh shit, I just got off the bus and they're already taking pictures? Better make the determined Cooney Face face."

The Orange have arrived at the Joyce Center! #CuseMode pic.twitter.com/qJUnlT4tJo

The face proved to be the difference in the game. Cooney made some important plays late to seal the victory over a very good Notre Dame team.

In this example, we see the development of the Cooney Face. The once-primitive Cooney Face has since evolved into a more sophisticated Cooney Face.

The Cooney Face was last seen in competition on Mar. 7 against NC State. According to many reports, Cooney has been working hard in the offseason on his facial expressions.

Most recently, the Cooney face made an appearance in his kitchen. It appears that all of that hard work in the offseason has paid dividends as the Cooney Face is already in mid-season form.

The Cooney face has even garnered enough attention to give birth to it's own twitter page. We're not sure who manages the page, but the smart money is on Sean Keeley (Ed. Note: It's not but it should be).