We've made it to week two. Have you eradicated The Saddest Tailgate in the WorldTM?

Share All sharing options for: "Go Away, 'Gatin'!": Central Michigan

Hoya Suxa has tailgated for everything -- football, basketball, lacrosse, and his own law school graduation, to name a few. Beef, poultry, pork, snacks, and more are all part of his arsenal. Stop cooking plain ol' hot dogs and frozen hamburger patties at your tailgates this year and actually have some respect for yourself and your friends.

Are you a Goddamn American Tailgating HeroTM yet? Have you suffocated The Saddest Tailgate in the WorldTM into blissful nothingness? If not, you only have precious few weeks left to uncork an ass-beating of massive delicious proportions on your friends and family, slinging grub that makes them want to actually acknowledge you as a human that exists. After today, we only have 10 more of these to help you throw The Bitchingness Tailgate on the Face of the PlanetTM, assuming that Terrel Hunt goes Rock 'Em Sock 'Em Throwbot on some unsuspecting jaw again and ruins the team's postseason hopes, thus denying us another tailgating journey. To track all of whatever this is, it's all housed in this handy hub.

I honestly thought that I had invented grilled jalapeno poppers not too long ago. Under the belief that I had created the culinary equivalent to Doc Brown's flux capacitor, I used some spare peppers from a jalapeno bread recipe that I had copped from Sarah Sprague and screwed around with the cream cheese spread, creating an inside-out jalapeno popper. High on perceived genius, a quick Google search ultimately crushed my soul. I was so depressed that I almost bought a Colgate t-shirt to try and adequately express my depression. They're still hot fire, though.

As for the pork sandwiches, these suckers are -- somewhat surprisingly -- rarely seen at tailgates. You'll see pulled pork and ribs -- done in varying degrees of acceptable, and we'll get to the good ways to do them later in the series -- but loin chop sandwiches seem to fall in the great unknown of "I can do that?!" These are easy, tender, and face-melting, which is the holy triumvirate of bending reality in your favor.

Step 1: Start with the mustard horseradish sauce. Whisk together all of the ingredients in a bowl until evenly mixed. If you skimp on the quality of the horseradish and mustard, you will deny your face straight-up lightning. Put the sauce in a container and chill in the refrigerator or cooler. 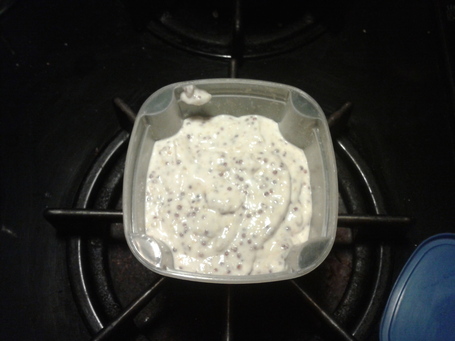 Step 2: In a bowl, whisk the paprika, granulated garlic, ground pepper, and ground sea salt to make a dumbed-down rub. As usual, the ingredient amounts for the rub is more of a ratio than an actual, follow-this-or-die-from-the-rub-exploding-into-a-massive-and-unforeseen-fireball amount. Add or reduce as necessary.

Step 3: Place the chops in a separate bowl and drizzle with olive oil. Don't drench the chops in the oil, but get all the chops evenly covered. You're touching greatness, pal/gal pal. It feels pretty good, right?

Step 4: Slowly add the rub to the bowl with the chops, tossing the chops to evenly coat the meat. Don't over-rub the chops; just make sure both sides of each chop are evenly rubbed with the spices. Cover the chops and set aside in the refrigerator or cooler until it's time to cook. 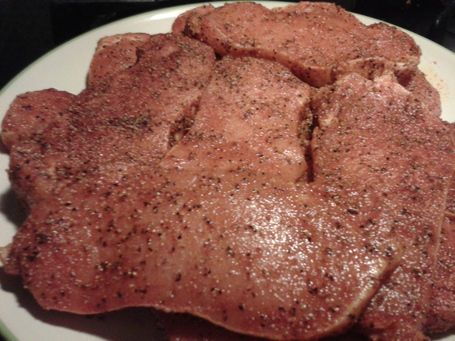 Step 5: Prepare your weapon for direct grilling. Get heat into the thing and clean your grill grates. Back down the heat to medium, swab your grill grate with vegetable oil, and place the rubbed chops on the grill, closing the lid to create sorcery from within. Depending on the size of your cuts and the heat you're working with, these will go quick: A couple of minutes to each side -- ideally turning only once -- should get the job done. You're direct grilling these, so monitor your meat so that it doesn't turn into pork dust. 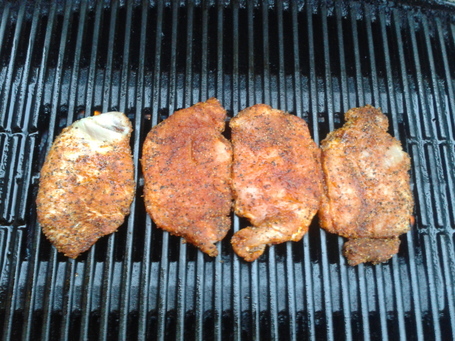 Step 6: When the chops are almost done, split your onion rolls and put them on the grill -- preferably under indirect heat -- to give them some pop. You can butter your bread -- euphemism! -- if you'd like, but it's unnecessary because the mustard horseradish sauce is still in your gravity. Be careful with the heating time on the bread, knucklehead; you want a light toasting, not black drywall.

Step 7: Remove the pork and buns from the grill, letting the pork rest for a minute or two. Cut the chops into 1/4" slices. It's almost time to rip a hole into the space-time continuum.

Step 8: Prepare the sandwich: Generously slather the mustard horseradish sauce on both sides of the roll; add the lettuce to the base slice of the roll, then a slice of provolone cheese. Pile sliced pork onto the cheese -- testing the physics of sandwich capacity is the preferred method here -- and place the top bun of the onion roll on this monster. Gorge yourself without self respect because you just created something amazing. 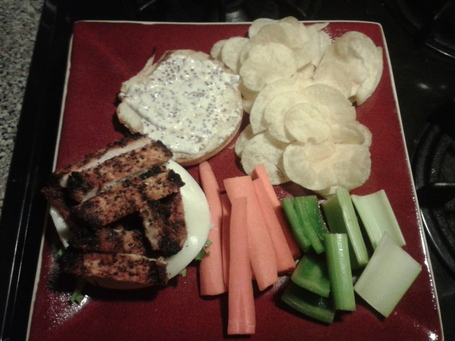 Step 1: Cook the bacon in a skillet, friend. Get it good and crispy so that it'll bring an end to all the civil unrest happening in the world. Put the cooked bacon on a plate or tray lined with paper towels to drain some off the grease, then crumble and chop into pieces. 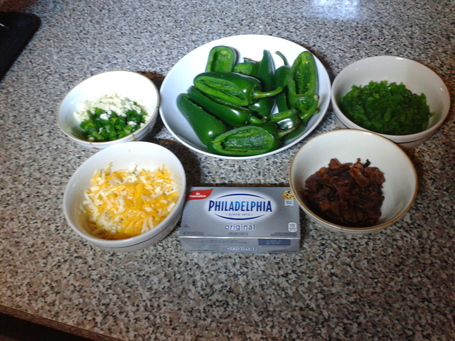 Step 2: In a mixing bowl, combine the cream cheese, cheddar, jack, onion/scallions, and minced garlic. Add the crumbled bacon as you stir this big mess of delicious until it's evenly mixed. At this point you should call your mother and exclaim, "I'm cooking!" She'll ask, "What?!" And you'll respond, "Adult food, jerkface!"

Step 3: Put on gloves, pal/gal pal (little cuts on your fingers sting like a mother when you work with hot peppers). Very carefully -- use the sharp knife that you usually threaten children with when they start wanting things -- slice the top off of the jalapenos, leaving the stems intact. You can discard the tops or chop them up and them to your cheese mixture. Scoop out the seeds and tyrannical pepper brains with a small spoon, pinching the ends of the pepper to widen the crevice. Using your threatin' knife, flatten the bottom of each pepper by shaving off some of the butt of the pepper (if you don't, the chilies will roll on the grill, dumping out the filling).

Step 4: Stuff each pepper with the cheese mixture. When done, add a dash of the paprika and parmesan cheese to the top of each pepper. You're almost in the great unknown of wonderful. 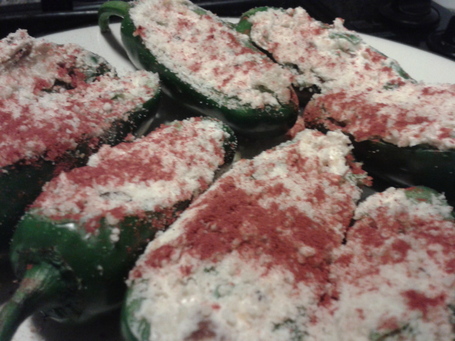 Step 5: Fire up your weapon and clean your grill grate. Back the temperature down to medium and swab the grill grate with vegetable oil. Ideally you're going to need to go with indirect grilling. Get the stuffed peppers on the grill -- cheese side up, knucklehead -- and close the lid. These will cook for around 30 minutes under indirect heat; the cheese mixture should be brown-ish and gooey and bubbly while the jalapenos should be good and tender. Under direct heat, these will probably be done in 5-10 minutes or so; watch the chilies so that they're not overcharred.

Step 6: Let the peppers rest for a few minutes unless you want to ruin your friends' mouths (I'm all for that, if you care). Consume. Now search for toilet paper and privacy.

Note: This whole series is probably going to morph into a big ol' tailgating recipe resource. I would suggest that if you want to float a recipe to the community, don't use the comments. Use a FanPost and lay things out like I did above. We'll feature good ones in some form or fashion.