It's week six! Which has now become a make-or-break matchup for Syracuse, as its season teeters dangerously on the edge of a cliff.

It's week six of the college football season, and your Syracuse Orange (2-2) will spend Friday night facing off with the Louisville Cardinals (4-1) at the Carrier Dome. But who's going to be playing on the Syracuse side? The athletic department has released the following depth chart: 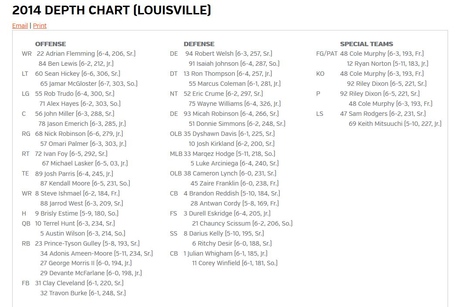 Considering the concerns about Ivan Foy, Brisly Estime and Kendall Moore, respectively, it's encouraging to see them all on the depth chart -- same as always. Though obviously, that means very little. Ashton Broyld was on last week's depth chart and certainly didn't come near the field. But this week, Estime is the only H-Back listed. Additionally, Jamal Custis has completely dropped off the two-deep altogether after failing to make the box score against Notre Dame on Saturday. There's also the lingering questions around Ervin Phillips, and whether or not he'll ever see this list, despite getting more carries than Devante McFarlane and George Morris combined.

Defensively, no real changes beyond the Antwan Cordy sighting as a backup corner. There were no changes on special teams either, but as we saw last week, that doesn't mean a lot either. Despite being listed as the starting kicker against the Fighting Irish, Ryan Norton was MIA in that game, so really, anything can happen.