Syracuse's greatest rivalry goes one more round when the Fightin' Byes come back to town.

The Bye Week Fightin' Byes. We have known no greater rival in our history and we have seen no other school more often on the schedule. The two teams have played every season since 1908, sometimes multiple times a year. It is a rivalry unlike any other...assuming you don't count all the rivalries Bye Week has with every other school.

Let's find out if this is the year BWU finally upends the Orange and take home the coveted Golden Pepper Grinder trophy. 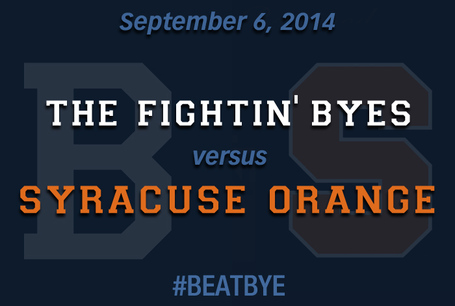 Game balls go to Terrel Hunt and the families of the BWU coaching staff. #SUvsBWU

School Connections: Former Syracuse head coach Greg Robinson graduated top of his class, Bye Week U '74. He is considered the school's ambassador to the world and honorary Board of Trustees president.

Last Year: Another tough season for The Fightin' Byes. They followed up an 0-11-1 season with another 0-11-1 season. Scott Shaeffer was the only BWU coach to survive the mass suicide attempt during the Syracuse game (launching his catchphrase, #HardIntestined).

Tunt refuses to play in anything but his ten-gallon hat. That might be why he's never made it past the second drive of any game he's played. Still, before he's concussed and unable to spell the word "cheese" without a J, he's elusive and dangerous and unstoppable with a lasso.

You might be thinking, "Wait, isn't that our guy?" No, we have Prince-Tyson Gulley, they have Prince Tyson Gully, as in Tyson Gully, Prince of Tobago (but interestingly, not Trinidad). Royal blood flows through those veins and his pedigree can make him tough to tackle. Or overthrow.

It's right there in this guy's name. He's brash. He's...oiled up. At least, that's how it seems once he's in the open field. Good luck catching him if he gets going. Seriously, good luck. He's wanted in nine states. You're on your own.

Fun Fact: A Bengal Tiger has appeared in the Carrier Dome during the game in six-straight years. Keep an eye on Charley Loeb on the sidelines, please. You'd think he'd be prepared, but, every year...