Things don't look good on paper for the Orange when they tangle with the Irish on Saturday. What does the TNIAAM crew think of that paper? Let's find out... 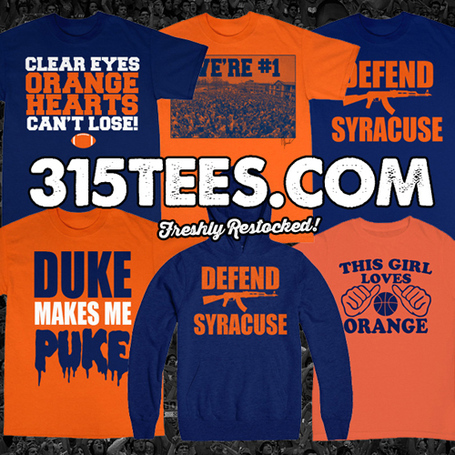 Yeap, going to be the disloyal idiot for the second week in a row. Quick question, do I get credit for being right with last week's prediction, even though, I picked Maryland to score no more than 20 points in a win? Just curious. Anyway, I want Syracuse to pull this victory off in the worse way (I have a funeral to go to earlier in the day and this would be a nice picker-upper), however, there's really nothing good about this match up that works in favor with the Orange. SU is going to need a lot of help when it goes to getting turnovers, making third-down stops and an amazing day from Terrel Hunt to make it close. I hope it happens, but don't think it is in the cards.

The Orange force Golson's first turnover of the season, and the offense looks the best we've seen this season. Terrel Hunt is as accurate as he was against Central Michigan and Brisly Estime has his first breakout game of the season. The six headed monster in our backfield controls the clock and allows us to set up our bubble screens. Our defense contains Golson and doesn't allow him to hurt us for chunks of yardage on the ground. We score late in the 4th to secure the win. (What can I say, I'm optimistic, they struggled against Purdue).

Golson is just too good and Syracuse has yet to see a defense quite as talented as Notre Dame's. I think Hunt will make a few plays, and one of the Orange's running backs will break a few runs. But the Irish, especially with a week to prep and playing in front of the home* Jersey crowd, are just better.

Scott Shafer's Syracuse teams have historically played very well following a loss or poor performance, and I do see SU bouncing back and giving a good performance in prime time. With that said Everett Golson and The Irish are every bit a top ten team, and The Orange we have to play flawless football for 60 minutes to spring the upset.

Unfortunately, I have yet to see 60 minutes of flawless football from a Scott Shafer team. We leave with our heads held high, but we still leave with a loss.

​I look for the Orange to come out of the gate much stronger than they did a week ago. They should be amped to play on national TV and they have to know they'll need their A-game just to hang with the Irish. For at least a quarter or two, I expect them to do stay within striking distance. But I also expect Notre Dame to ultimately pull away. I just can't envision Everett Golson not picking apart a Syracuse defense that has so far been torched by Villanova's John Robertson and Maryland's C.J. Brown. And though I predicted​ Terrel Hunt will have his best game to this point in 2014, I still don't think it will be enough for the Orange to keep up. I hope I'm wrong.

Against a very good Notre Dame defense, Syracuse just can't seem to move the ball with the same fervor they have for the past two weeks -- but that doesn't mean they can't move it, either. Quick, early scores by each team give a sense of a shootout before both defenses settle in for what ends up being a slog for the entire second half. Terrel Hunt plays largely turnover-free football, but a single first-half miscue ends up costing SU dearly in a one-possession final score. The Orange play very well, but because they can't get past their red zone issues, they ultimately fall just short against the Irish.

I expect a decent showing out of the Orange at Metlife Stadium, but once again I expect to fall a bit short. At the end of the day, Everett Golson is going to be the best player on the field, and Notre Dame has more talent overall. I think that the team gets up for these big games, and I expect a cleaner performance than we saw Cuse put on against Maryland, but I think chances for a win are pretty slim. They're not impossible though, Notre Dame is hardly a world beater this season, and...well 2008 happened, so anything is possible.

The score might make it seem like a somewhat-easy victory for the Irish but I do think the Orange will put up something of a fight. It might ever seem like Syracuse will win, but they should be able to put some points on the board and at least keep things entertaining. Unfortunately, there are a couple games on the schedule this year that we're just not prepared for and this is one of them.*

*Let that be the jinx that I so hope it is.

Now let's find out what you think...