Welcome to week five, which is hopefully better than week four. Who's suiting up for Syracuse against Notre Dame this Saturday?

We're now in week five of the college football season, and your Syracuse Orange (2-1) will spend this Saturday taking on the Notre Dame Fighting Irish at MetLife Stadium in East Rutherford, N.J. But who's going to be playing on the Syracuse side? The athletic department released the following depth chart yesterday: 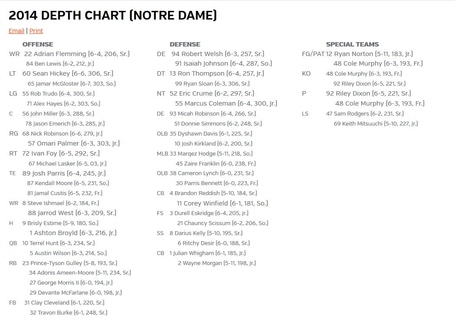 Some obvious changes right off the bat, with Brisly Estime moving to the top of the H-Back two deep -- though no clue why Ashton Broyld is still on there at all after being ruled out of the game with a leg injury. While Josh Parris did return at tight end last week, his impact was minimal. However, it seems that could change against the Irish, since he's now back atop the depth chart at the position. Jamal Custis, who's arguably gotten the most burn at tight end, shifts all the way down to third now.

... And that's it on changes. For those hoping to see Cole(trane) Murphy at the top of the place kicker depth chart, I guess you're going to have to wait another week or so. Ryan Norton's still got another Bud Light tallboy's-worth of confidence in him, and Scott Shafer wants to see that through.