Well, that's one way to bum you out for the rest of Saturday...

Syracuse managed to take care of its biggest concern going in -- containing Maryland QB C.J. Brown -- but that didn't much matter in a very frustrating 34-20 loss for the Orange this afternoon. With a Carrier Dome crowd of "40,000" onlookers in attendance, the Orange seemed to be their own worst enemy throughout the game, turning what could have been a hard-fought, close win into a one-sided loss to the Terrapins.

A quick look at the box score tells you the tale of aggravation. The Orange had 576 total yards. They had 357 (!!!) rushing yards, including 100-yard days from Terrel Hunt (career-high 143) and a resurgent Prince-Tyson Gulley (138). And they ran over 80 plays from scrimmage. Typically, these are elements of a successful day for Syracuse, but instead, they spell out the day's issues, plain and simple: SU could not get out of its own way, and single-handedly defeated itself on Saturday.

Now that's not to downplay what Maryland did, either. The Terrapins saw Syracuse was going to give C.J. Brown time to throw right at the onset of the game, and they took advantage right away. The Orange blitz was largely non-existent early on as they rushed five and dropped two linebackers into coverage for the first couple drives -- a strategy that did not work in any way, shape or form. While our consistent pressure is an asset many times (see: last week), it also doesn't given linebackers much of an opportunity to be out in man-to-man pass coverage. Maryland exploited one-on-one matchups underneath with speedy options Stefon Diggs and Marcus Leak, before setting up downfield bombs and bubble screens for scores. That whole thing about Syracuse's defensive backs being able to "match up with anybody?" Yeah, not so much...

That's not to say the defense was ALL bad, however. After allowing 24 points in the first half (plus a pick-six to get it to 31), they began to settle in a bit as Maryland's offensive approach got more conservative and the pace slowed. SU began generating pressure and hitting Brown, though without an offense capable of putting the ball in the endzone, things never really got closer. By the halfway mark in the third quarter, it appeared that Syracuse's offense was willing to take its foot off the gas, which in turn, gave the green light to Maryland to do the same. It's tough to find a team more disinterested in a game well in reach than the Orange squad that showed up in the second half.

Offensively, you know the numbers that the Orange put up (above), but we're not done being frustrating just yet. Repeatedly stalling out on Maryland's side of the field, the SU offense was -- at times -- sick performance art, or the most tragic comedy you could witness. Any momentum that got them into scoring range was quickly wiped out by penalties, questionable play-calls, a failure to execute, or all three in an effort that gives fans as many people to blame as they could possibly ever want. The following shows you Syracuse's offensive drives in the game. Try not to scream: 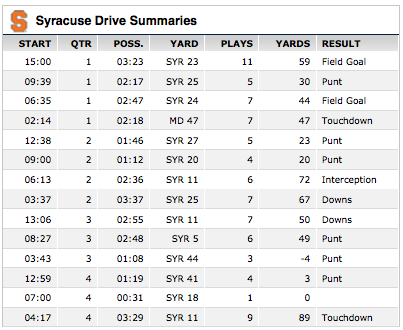 Three different punts in Terrapin territory. Five different drives deep into Maryland's part of the field that DID NOT end in touchdowns, and of those, only two ended in field goals. Cole Murphy was the team's best kicker on the day, hitting a 49-yarder, while Ryan Norton did his typical "I don't know... I guess I'm okay" act, worrying us immensely about what happens with the field goal unit for the rest of the year. Hunt looked accurate at first, and admittedly had some nice longer throws (especially that 51-yard beauty to Jarrod West (who's alive, by the way), but those moments were countered with just as many if not more overthrows. At least five passes went over the heads of open receivers on the day, and coupled with the interception and a confusing amount of short-yardage plays when 10 or more yards were needed, it's tough to gauge Hunt's overall performance. Which shifts us to play-calling:

We'll go over plenty when I torture myself on Tuesday by breaking down the game's full slate of plays, but the amount of bubble screens with no blockers and halfback dives on 2nd and 25-ish we saw made no logical sense to anyone who's ever watched a game of football. Last week, we saw the good in what George McDonald's play-calling can do when it's operating at peak efficiency. This week was the other side of that coin, in a game that Syracuse could've every well gotten back into things if not for a staunch insistence on doing the wrong thing at the wrong time. Down 18, play-calling was conservative and uninspired. And the decisions by Coach Shafer to punt so many times late in the fourth while down 18 continue to baffle me an hour later.

So where do we go from here? Syracuse's offense looked very good at times and very bad at others, but the latter outweighed the former in a loss that never should have been -- same with the defense, too, while special teams was absolute disaster that even ended the #RileyDixon44Heisman campaign in its tracks. The biggest problem moving on from this game is that we still have no clue what the Orange are and aren't. They can obviously move the football incredibly well -- much better than last year. But have no ability whatsoever to finish drives (unless it's giving Hunt the ball and letting him pinball his way into the end zone). Last week, we finished enough drives, this week, we didn't. Which team shows up next week? And on defense, which team -- the one from three of the last four halves, or the one from today's first half -- takes the field against Notre Dame?

Too many questions and not enough answers in this one, which certainly puts a bad taste in everyone's mouth. Be thankful it's over, and just hope something changes next week for Syracuse, who's now 2-1. Play nice in the comments, please. No matter how bad things seem with this team, we're all still Orange fans.