What the P-S Won't Tell You About: The Maryland Terrapins

Our unofficial, nonsensical football preview series continues with the Chiefs of The Chesapeake, The Kings of the Crab Cake, The Heroes in a Half Shell: The Maryland Terrapins

Share All sharing options for: What the P-S Won't Tell You About: The Maryland Terrapins 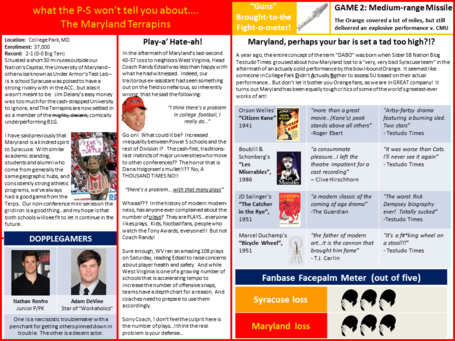 Remind me, why on earth were we so down on our football team a few weeks ago?

I will readily admit that I thought Syracuse would go to Mount Pleasant and get a win against Central Michigan, but there was no way I expected us to execute in all phases of the game (offense, defense, special teams, and unis) the way Scott Shafer's boys did on Saturday.  It has been a long time since Syracuse has put their foot on the throat of a weaker opponent and killed off the game early like we did against The Chips.  It was such an impressive victory that I hope the coaches allowed the kids to enjoy a nice movie on the bus ride back to Lansing..."The Longest Yard" would have been a solid choice -- the Burt Reynolds version, not that Adam Sandler crap!

So here we are heading into Game 3 with that 2-0 record we expected, and with it a sense of optimism that we can be undefeated heading into the most difficult phase of the season.  Up next is a good Maryland team...one that was able to go toe-to-toe with West Virginia for 60 minutes...but a beatable team nonetheless.

We've definitely seen the worst from The Orange this season, that, I am sure.  Perhaps we have also seen the best as well.  Whatever.  If the kind of effort and performance that we gave in rural Michigan is any indicator of what is to come, seven, eight or even more wins is within our reach!

In this week's preview, we take solace in the fact that Maryland's harsh criticism of our 2013 football team is at least consistent with their opinion on just about everything.  We also dive into the the complex mind of Maryland Head Coach Randy Edsall, who thinks college football has a big problem on their hands...