It's week four! Who's suiting up for Syracuse against Maryland when the Orange take on the Terps at the Carrier Dome?

It's week four of the college football season, and after what feels like a very long time away, the Syracuse Orange return to the Carrier Dome this weekend. On Saturday, the Orangeare visited by the Maryland Terrapins for a contest starting at 12:30 p.m. ET. But beyond the teams -- who we know -- who are the players that will be in Orange/Platinum/Blue/White (???) come kickoff? 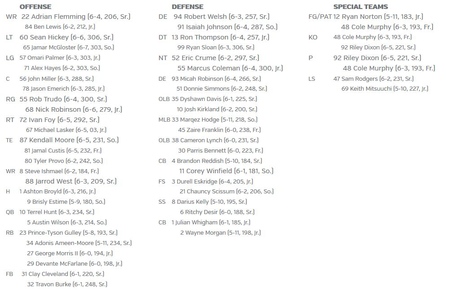 Yup, after last week's big win over Central Michigan, absolutely nothing has changed. Though knowing Scott Shafer, we also know that could mean nothing as well. Ervin Phillips was not on last week's depth chart, yet played a huge role. Jamal Custis was listed as the second tight end, yet had more balls thrown his way than starting tight end Kendall Moore. Speaking of tight ends, where's Josh Parris, by the way?

Also, while there's no depth chart listening for punt returner... I probably speak for most of us when I say I hope that Brisly Estime is at the top of that hypothetical list, rather than Ritchy Desir. Sorry, Ritchy. Better things happen when Briz has the ball. It's science.