What the P-S Won't Tell You About: Central Michigan

Fresh off "The Greatest Week 2 Bye Week of All Time", our lighthearted opponent preview series continues with The Central Michigan Chippewas

Share All sharing options for: What the P-S Won't Tell You About: Central Michigan 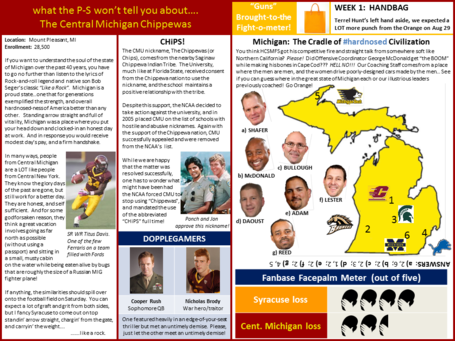 Like many of you fellow Magicians, I like to spend my football bye week recharging the batteries of my fanli-hood by grabbing some hot wings, curling up in my favorite chair, putting on "Music from NFL Films, Vol 1", and dusting off my favorite hardcover read:  Twitter!

With our nerves substantially frayed following our escape to victory over the now obvious favorite to win the FCS, I desparately browsed my phone for some nuggets of wisdom from the twitterati...140 characters from one of our enlightened fans or student-athletes that would calm me down, put things in perspective, and ultimately allow me to look forward to the remainder of the 2014 football season with the same sense of optimism and confidence that I had on August 28th.

I sought comfort from the masses, yet ultimately found it following some much-needed straight talk from "royalty"

It's hard to win games in College Football,,ugly one but the job is done. #OnToTheNextOne

You had me at hello Prince-Tyson Gulley....

And he's right.  It is hard to win games in College Football.  Particularly at the beginning of a season when most teams are still finding themselves.  And if you scan across the first two weeks of the college football season just about everyone has found winning to be hard.  Everyone is having their personal brand of struggle...Florida State, for instance, is allowing more than 1 yard per play on defense this year!  Miami's offense is already considered in free-fall by only putting up 41 points against Florida A&M!!  Even poor Wake Forest could only beat a single guy named Gardner Webb by two touchdowns.  Only two!!!  And Syracuse?...well, we hadn't won an opening game of the season in ages it seems, so being 1-0 in-and-of-itself should be a reason for celebration regardless of how we got that win, right???

Taking PTG's truth to heart, I have indeed calmed down, and now look at our second game of the season as a much truer litmus test of just how good we are going to be this season.  Make no mistake, our opponents, the Central Michigan Chippewas, are at worst the equals to Villanova.  And with home field advantage taken away, our heroes in Orange are going to have to put in a MUCH better performance in order to get us to the place we all expected us to be when we started this journey... 2 wins, no losses.

I think we'll get there on Saturday.  But it won't be easy.  With Syracuse football, it never really is...

In this week's preview, we introduce you to a team and locale that are in many ways a MAC-sized mirror image of our own.  We offer archeological evidence supporting the fact that the state of Michigan is the epicenter of #hardnosedness, and we admire the persistence of the NCAA's PC police...handing down judgement on Central Michigan's nickname when no judgement was necessary.  Oh, and we initiate our latest HCSMFS-approved* feature scoring SU's performance from the previous game:  The "Guns-Brought-To-The-Fight-o-Meter"!