The 2014 season kicks off tomorrow. How well will we do? Who the hell knows, we're just guessing here...

For me, it really all comes down to September 27 and October 3 for Syracuse. Beat Notre Dame and Louisville, both winnable games, and an eight-win season is more than doable. And the thing is, with the controversy surrounding the Fighting Irish and the injury to the Cardinals DeVante Parker, starting the season with five straight wins is also more than doable.

Still, I know SU could flop at Central Michigan and struggle to beat Maryland and things could go south, quick. But I think something special is happening on the Hill and even if the Orange stumbles against either Notre Dame or Louisville, eight wins is there for the taking. And Syracuse will either be the taker or will I be the taken.

Oh man, do I want to say 8-4 here. But knowing how things work in the ACC, there's going to be a slip-up (or just an understandable loss to Louisville). This team has experience, as we know, but can the returning talent deliver better results than last season? That's the challenge, and the reason everyone's doubting the Orange. And it's tough to blame those critics after quickly recalling some results from last season (all losses; 56-0, 59-3, 49-14, 48-27).

But as we know, there is actually a lot of promise on this roster. Terrel Hunt looks primed to take a leap in production mirroring his end-of-season production last year, and it's all due to a slew of returning playmakers, an experienced line and a simplified playbook. On defense, the secondary could see some major improvement behind Durell Eskridge and Julian Whigham -- which could propel the entire D forward too. Sure, it's foolish to bank on every potential positive outcome, but even with a few breaks in SU's direction, this is a team on the rise that should find itself right in the thick of 10 of 12 games this season.

There has been nothing out of Orange camp this year but positive vibes. The QB position has been solidified by Terrel Hunt, who has a great command of the playbook and the huddle. The offensive line could be one of the best in the ACC with 7 guys fighting for positions. The RB stable is diverse and has the ability to break out. The receiving core is as strong as it's been in years. I have incredibly high hopes for McDonald's side on the offensive end.

On defense, the Orange also appear strong, but replacing a core of Jay Bromley, Marquis Spruill, and Keon Lyn will make for a few growing pains. However, it appears players like Eric Crume, Marqez Hodge, and Julian Whigham are ready to step up, and our youth is encouraging.

I think we don't have a chance to beat FSU or Clemson. But every other game is winnable.

Fall is here, and with the changing of the seasons comes two great American traditions: the beginning of college football, and the annual underestimation of the Syracuse Orange by our nation's sporting pundits! And while many see an average team going nowhere, I see 17 returning starters, a veteran QB who finished 2013 strong, and a #hardnosed program that can do more in 2014 than just pound weaker opponents into submission.

Indeed, I see an offense that will be more effective in moving the ball, and a defense that should be prepared to limit the big plays that killed us at times last year. The effectiveness of our interior D-line and WRs will determine whether we take a modest step forward or take a Duke-esque leap in 2014. I guarantee we'll take down at least one ranked team this year, and I'll see you all in late December for our biennial trip to the Bronx!

I see the Orange winning the games they should win -- vs. Villanova, at Central Michigan, at Wake Forest, and vs. NC State. I also expect Syracuse, playing in the friendly confines of the Carrier Dome, to have a slight edge over Maryland, a relatively evenly-matched opponent, on Sept. 20. Great, we already have five wins!

My case for two more: Syracuse upsets Devante Parker-less Louisville at the Dome in early October (week day game!) and at least split its final two regular season games, when the Orange are at Pittsburgh and at Boston College, both of which will be winnable. That puts 'Cuse at 7-5 and will give the team a chance at a third consecutive bowl win and second straight under Scott Shafer.

My brain tells me 7-5, but my heart tells me 8-4, so screw it, we're going to a good bowl and will be shooting for win number nine come December.

The whole build-up right before the season is probably most of the reason that I've been getting higher on the team than I was even two weeks ago, but it also feels like Syracuse has mostly skated past the injury bug. SU has had a few important guys miss time, but other teams like Louisville and Duke, who are definitely swing games on Cuse's schedule, have lost huge players. The Dome schedule is also pretty favorable, aside from the Florida State game. Experience has also proven to be key to having strong, consistent success, and Syracuse is one of the conference's most experienced teams from top to bottom.

SU is still a year or two from competing for the ACC's top few tiers, but I think this year should help cement Scott Shafer's team as one of the "best of the rest," and hopefully everyone around the country finally takes notice that this team is worth at least paying attention to.

Bowl: Anything better than the Texas Bowl

There's been a ton of talk about eight wins being the goal and I do think this team has the talent, with the help of the schedule, to put together one of the most success SU football seasons in along time.

Sure, Ryan Nassib isn't behind center and we're missing maybe our best offensive player from last season, Jerome Smith, but I have a lot of confidence in Terrel Hunt to make good decisions, make plays with his legs and arm and the rest of the running backs to make up for that loss. I also think this will be a breakout season for Ashton Bryold, as I think a full offseason with him working with George McDonald is just what he needs to become a ACC star. The defense? Well, we always plays some pretty steady defense under Scott Shafer and there's no way our secondary is going to be as bad as it was the past few years. Lets do this!

Here's my concern. I'm having flashbacks to 2007. Everyone's excited about the season, hopes are high and expectations are running rampant. And then our dreams are crushed within one quarter of actual gameplay. I don't see this team letting us down like that, but, I worry we're heaping too much expectation on them, especially with an injured offensive line, depleted WR & TE corps and unproven DL and DB units. BUT, I also see that this is a core of a team that went 7-6 last season and, by all accounts, should be better. I don't expect Terrel Hunt to turn into a Heisman contender (yet) but I think he's be more reliable and so will the offense in general.

The bad news is that even if we do hit the eight-win mark, I think we might get shafted in the bowl department. If the ACC has a lot of bowl eligible teams, the southern bowls are likely to pass us by, leaving us to hope between the Military Bowl, Quick Lane Bowl (nee Detroit Bowl) or Pinstripe Bowl. Regardless, I'd still be thrilled to get to eight wins no matter where that leads us. We're still a couple years away from complaining about bowl status, let's just keep going to them...

Now it's your turn, and here's a little extra incentive...

Vote in the poll for what you think Syracuse's regular-season record will be and then leave a comment below with your reasoning (and bowl placement, if any) and you'll be entered into a giveaway to win a free Syracuse Crate! In fact, it's not just any crate, you get a free SUper Crate, which includes... 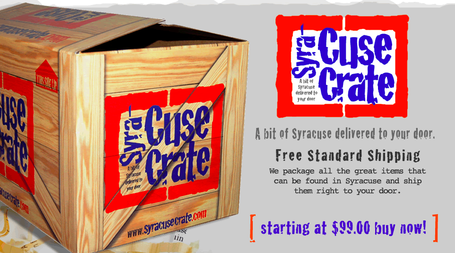