Hoya Suxa wants your tailgate food to not suck something fierce. Listen up, college boy. You might learn something.

Share All sharing options for: "Go Away, 'Gatin'!": Syracuse vs. Villanova

Hoya Suxa has tailgated for everything -- football, basketball, lacrosse, and his own law school graduation, to name a few. Beef, poultry, pork, snacks, and more are all part of his arsenal. Stop cooking plain ol' hot dogs and frozen hamburger patties at your tailgates this year and actually have some respect for yourself and your friends.

The 7:30 start on Friday night makes this week's tailgate options tough. You're either taking the whole day off to tailgate like a Goddamn American Tailgating HeroTM or you're only going to have an hour to throw something on the grill. So, I'm going to try and address both groups: Those that are making their Friday a show will get appetizers and those that are rushing to the lot from work will have the meal that they'd eat every day if their six year-old self was in charge of their life.

I have become a devotee to grilling wings over frying them (steaming them before grilling them is even better, but we're skipping that today). There's something about putting these buggers on the grill that makes children around the world join hands and sing a song of peace. And the Guinness Cheese dip -- a recipe that I totally copped and have not adapted one bit -- always wins the tailgate. These are easy moves to make on your journey to becoming a Goddamn American Tailgating HeroTM.

Step 1: Wash these mothers in cold water. Put on a cutting board lined with paper towels and pat dry.

Step 2: Cut these mothers up. Find the wings' two knuckles and separate the flat and the drum (this video will help you if you lack common motor skills). Don't force the knife. Just ease it through there, creep. Separate the wings into two separate piles: Team Blue and Team Orange (or, if you want to make just one style, don't do this; you're ultimately on your own, kemosabe). 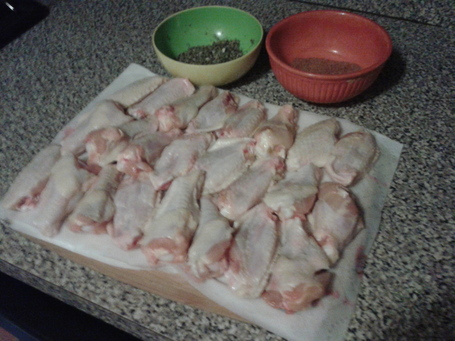 Step 3 (Blue) (Optional): Put the Team Blue wings in a resealable plastic bag, pouring in the wheat beer. I'm using Six Point Apollo for these. Let the marinating wings sit in the refrigerator for at least 12 hours; the longer they marinate, the more potent the beer flavor. This is all actually happening.

Step 4 (Blue) (Optional): Remove the Team Blue wings from the refrigerator and drain in a colander. Pat dry with a paper towel.

Step 5 (Blue): Put the wings in a bowl and drizzle them with olive oil, covering all the wings but not drenching them. In a separate bowl, whisk the herbs and spices -- salt, pepper, oregano/thyme, rosemary, and minced garlic. (Add/reduce as necessary. The above ingredient amounts are more ratios than actual amounts. I used about half for these.) Lightly add the herbs to the bowl with the wings covered in olive oil and toss until the wings are evenly coated.

Step 6 (Blue): Put the seasoned wings in an aluminum tray and set aside until ready to grill (cover if putting in the fridge or in a cooler).

Step 3 (Orange): In a bowl, whisk the spices -- everything except the Frank's -- until mixed. (Add/reduce as necessary. The above ingredient amounts are more ratios than actual amounts. Season appropriately to the size and number of your wings. I used the entire deal for these wings.) Throw the wings in a separate bowl and drizzle with olive oil, covering all the wings but not drenching them. Lightly add the rub to the bowl with the wings covered in olive oil and toss until the wings are evenly coated.

Step 4 (Orange): Put the rubbed wings in an aluminum tray and set aside until ready to grill (cover if putting in the fridge or in a cooler). 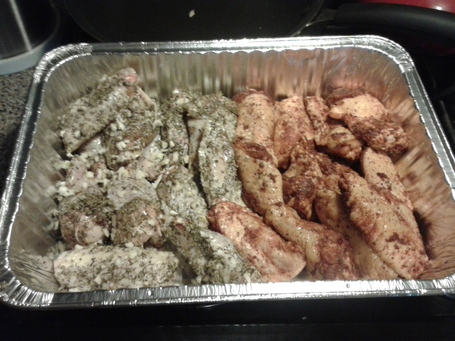 Step 5 & 6 (Orange): Does not exist. Just stand around and look handsome or pretty or something.

Step 7: Set up your weapon for medium heat. (You can direct or indirect grill these (the skin comes out better with indirect grilling, but you may not have that choice at your 'gate). If you direct grill them, you have to be careful and watch out for flare-ups and accidentally turning them into dust. If you have no idea what indrect versus direct grilling is, this should help you.) Make sure to clean your grill grates and swab them with vegetable oil before putting anything on there. You don't want your food to stick to the grates, thereby making Earth spin into the Sun (probably). Place the wings on the grill -- again, it's up to you if you want to direct or indirect grill these mothers, but if you go with the direct method leave an indirect spot available in case you start running hot on some wings -- and close the lid. Let the wings cook, ideally turning them only once (but you may need to turn them periodically), while occassionally monitoring the visual appearance of the skin (but not like a sociopathic helicopter parent). The wings will turn golden brown. When the wings are cooked though -- no blood seeping through the wings or near the bone if you carefully cut into a wing -- remove from the grill. It'll take around 30-40 minutes to finish them if you indirect grill them and 16-24 minutes if you direct grill them (this all depends on the size of the wing, your heat, and whether Earth is currently in the middle of the Sun). I direct grilled these (because I lost my roasting shield and rack in a freak I'm-an-idiot moment). 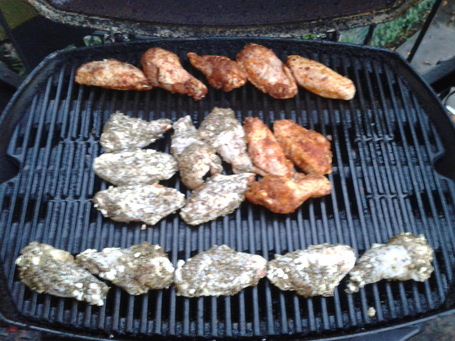 Step 8: Team Blue wings are done and ready for your friends' fat mouths. Throw the Team Orange wings in a bowl or Tupperware container and drizzle Frank's over them. You won't need much; start light and add as necessary to avoid wasting delicious Frank's (just like how you added the rubs and herbs). Toss or shake the wings in the bowl or Tupperware container to ensure that the wings are evenly coated. Once you've done that, the Team Orange wings are done and ready for grubbing. 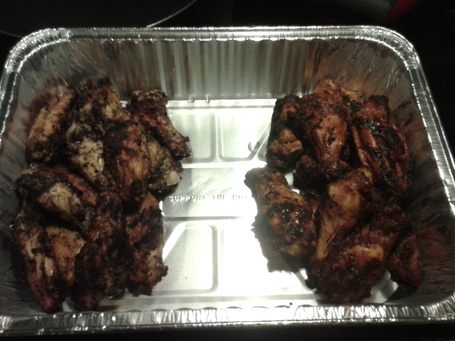 Step 1: In your blender or food processor (basically, anything where you attempt to dispose of evidence), combine the cream cheese, cheddar, Dijon, and half and half. Pulse the thing until the consistency of the stuff is smooth.

Step 2: With your machine humming, slowly pour in the Guinness and blend until evenly combined. The mixture should not be too runny; it should have a smooth consistency (it'll thicken up overnight). You're making a dip, not diarrhea.

Step 3: Add the scallions, garlic, parsley, salt and pepper and blend until thoroughly conistent with the rest of the goop. If you haven't lost any fingers yet you're doing a hell of a job.

Step 4: Throw everything into a Tupperware container and let it chill overnight. At this point you can get drunk or whatever on all the leftover Guinness because you're done, champ. 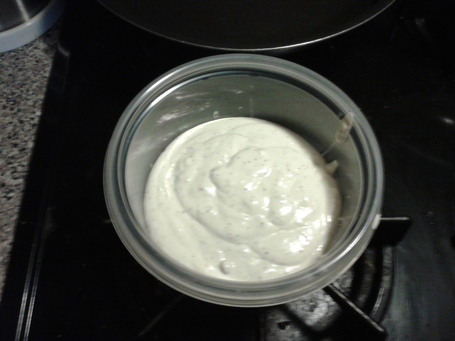 Step 5: Serve with the crackers or Fritos or vegetable sticks. When your friends piss their pants with happiness, let them know that making it was incredibly difficult and that they're lucky to have you as a pal/gal pal.

Note: This whole series is probably going to morph into a big ol' tailgating recipe resource. I would suggest that if you want to float a recipe to the community, don't use the comments. Use a FanPost and lay things out like I did above. We'll feature good ones in some form or fashion.