#StickToSports: I Read The Walking Dead Comics & I Have Thoughts

I read Compendium One of The Walking Dead and then thought about how better/worse it was than the show. Here's what I learned.

Share All sharing options for: #StickToSports: I Read The Walking Dead Comics & I Have Thoughts

I'm not much of a comics/graphic novel person. Other than a six-month stretch when I was thirteen when I got really into X-Force (R.I.P. Shatterstar) for some weird reason, I haven't really read that much. No judgment, just never my thing.

That said, I found myself in the library the other day (Yes, I still visit the library). I found myself in the graphic novel section (as one does) and I noticed The Walking Dead, Compendium One. It's the first eight volumes of the comic (do we still call them that? Graphic novels? Books? Is that better? I don't know.). Basically, it goes from the beginning of the story to the end of the prison location (I should probably point out here that I'm going to be talking MAJOR SPOILERS for both the books and the TV show). 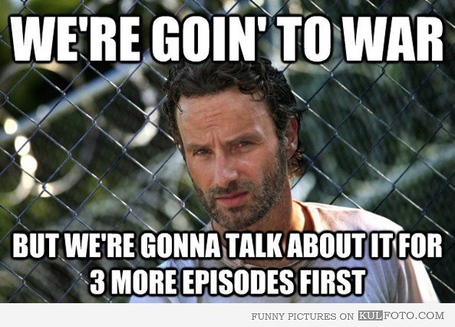 I've had some pretty strong opinions about the TV show. I even gave up on it briefly during that stint at the farm (THAT GOD DAMN FARM...). After a brief hiatus, I started hate-watching and have finally witnessed the show realize what it can be in S4, though there's still plenty of issues.

What I was interested in finding out was how many of the issues I've had with the show came from the books and how important are the changes they've made? And also, did they seriously spend that much time at the f***ing farm in the books as well?

Here's what I found out. 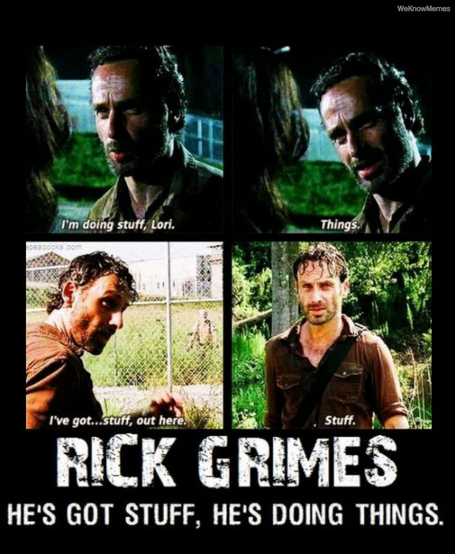 1. Rick Is Such A Better Character In The Books

TV show Rick Grimes has a serious case of the Jack Shepards. He's the main character in an ensemble show who also happened to be the least interesting character on the show. I've often wondered if the show would actually benefit by killing him off. It would be a huge shock but it really wouldn't hurt the storytelling all that much. We've pretty much learned who Rick is and what his story is at this point.

It's a shame, because after reading the comics, they've missed so many interesting nuances about the character. He's much more complex, already exhibiting some dark tendencies long before the worst things happen to him. It's way easier for him to "deal" with Shane. He straight-up murders a guy. And the whole showdown with The Governor is much more compelling. In the book, Rick almost becomes a tyrant before his people pull him back from the brink. Then, he meets the Governor and finds out exactly what he was on the road to turning into. It adds a great storytelling layer to that plot, something missing from the show (To be fair, nuance has only recently found its way there in general).

Rick spent S4 basically just being a punching bag and yelling CORALLLLLL a lot. I don't know if they've got much more than that planned for him in S5. Based on what's come before, probably not.

The Walking Dead's issues with race are well-documented. First there was T-Dog, who was just kinda there. Then as they introduced a new African-American character (Oscar), they killed T-Dog off. And then when they introduced Tyrese, Oscar died. It was as if there was some kind of One Black Guy At A Time rule in effect. Since then they've worked to even things out by keeping Tyrese & Michonne around and introducing other African-American characters who have lines and actually stick around.

Here's the really weird part. I knew Tyrese was in the books but I didn't realize just how important he was. Tyrese plays a HUGE role in the comic, and almost all of the things he did were passed along to white characters in the show. Tyrese's role as Rick's right-hand man became Daryl's (not that I'm complaining about Daryl). Tyrese's affair with Carol also goes bye-bye and kinda-sorta becomes Daryl's as well. His love affair with Michonne? Jettisoned. Even his noble death goes to a white character (Herschel) instead. Just a complete 180 from the books.

At every turn in the TV show, Tyrese has been an incidental character, never in charge and never a major player. It's fairly shocking considering Robert Kirkman is involved with the show. He neutered one of his strongest early characters and doesn't seem interested in making up for it all that much.

3. The Show's Women Issues Come From The Books

This one surprised me as well and made me realize I've been giving Kirkman way too much credit this entire time.

As badly as the show has done by African-American characters, female characters come in a close second. Lori was just the wet blanket to end all wet blankets. Also, a horrible, horrible driver... 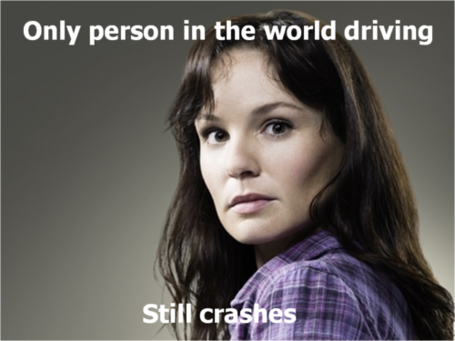 Andrea picked up that mantle and ran with it when Lori died. Early Carol was just kinda...there. Thankfully, Michonne showed up just in time and Carol has evolved into one of the most interesting characters in the show.

In this case, it's the show that wins. That's because all of the female characters in the books are mostly just there. Lori is pretty much exactly how she is in the books. Carol is a sad codependent who goes with suicide by zombie when she gets rejected one too many times. Andrea is the only one who seems to have any kind of agency but even then there's a limit. When Rick's leadership is called into question, a council of men and only men takes over. They even explain that none of the women want to be leaders. We can debate the merits of male and female societal structure another time but this just doesn't ring true at all.

Of course, Michonne is the same bad-ass you'd expect, probably even more-so, but it has to be noted that she's on the receiving end of some of the most brutal sexual abuse possible. Yes, she gets to dole out some revenge, but...still...

I just feel bad for the actresses who played Lori and Andrea. I assume they get most of the blame for their character's problems, but clearly, it's the writers who gave them crap to work with.

4. The Farm Was Not A Big Deal At All

I don't know how it felt when the books were just coming out but, reading it after the fact, you realize that the crew spends a LOT more time at the prison than they do at that BORING-ASS FARM. I was pretty happy to see that terrible choice was not entirely based on the progress of the books. It was merely the hubris of the TV show to think we'd be cool watching episodes where everyone sits around deciding how to get a zombie out of a well for 50 minutes.

5. The Governor Was SOOOO Much Better In The Books

You probably knew this but, yeah, they really pussied out on The Governor.

Right from the get-go, he's a nightmare menace in the books. Within a couple pages of meeting him, he's already cut Rick's hand off. There's barely any fooling around or faking things. He's evil from the start and he's evil 'til he dies. He certainly doesn't have nuances and he certainly doesn't require a multi-episode redemption arc that doesn't pay off anyway.

I get that they needed to flesh him out for the TV show but this is a perfect example of too much fleshing. Like a lot of things on the show, they took something that should have lasted one season and stretched it out over two. And the character suffered for it.

Oh my God, though, does Michonne mess him up in the comics....holy moly...