Get To Know Your Orange Man - #28 CB Antwan Cordy

Share All sharing options for: Get To Know Your Orange Man - #28 CB Antwan Cordy

2013 Stats: Was an All-Dade County selection in 2012 and 2013. As a senior last season, Cordy helped lead South Dade to the Florida Class 8A State Championship. He finished his high school career with 15 interceptions and 180 tackles.

2014 Projections: Cordy is listed third at left cornerback on the depth chart, which might indicate that he will redshirt his freshman season.

How'd He Get Here: Antwan opted to play at Syracuse despite offers from Duke, Georgia Tech, Hawaii, Marshall, and Minnesota. He was recruited by George McDonald.

What'd Recruiting Sites Say: Rivals and Scout each give Cordy a two-star rating.

"The Florida boys got that talent...It’d be great to have all the Miami boys come to Syracuse."

We agree, Antwan, we agree. Next up: Convincing them to trade South Beach for snow.

Links Of Wonder: Cordy was the first player in the class of 2014 from Florida to sign with Syracuse.

Tweets Of Wonder: Thanks? 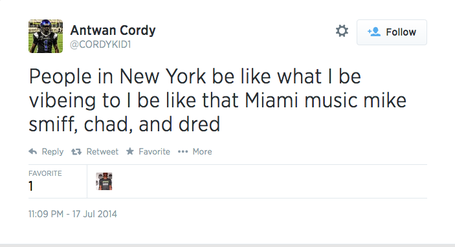 What Does Shafer Eric White Think Of Him: He seems pretty happy. From White's Twitter:

"My man @CORDYKID1 never stops smiling and neither are we now that we got him!"

Interesting Nugget O'Interest: Cordy was born in Naranja, Florida. Naranja, of course, translates to "orange" in Spanish. No, that is not a coincidence.

Let's Get A Good Look Atcha: