The big, I mean BIG, games are destined to draw in the Salt City. The other games? Um...

Share All sharing options for: Syracuse: Sports Town Or An "Attendance" Town?

The cavernous Carrier Dome is no such a thing when there are more than 30,000 basketball animals inhabiting their domain. And I sincerely love few places more than the dome when it's so packed you can't walk the halls without bumping into hundreds of new-found friends.

Truth be told, I fell for the Dome during an SU vs. Wagner hoops game decades ago. Not exactly filled to the brim. But when full, the old place is down right cozy!

Actually, some of my favorite memories of the Big Top are of football games. I swear, the 1994 home date against Miami my ears hurt and popped like I was flying across country miles above the ground. Instead, I was attempting to have a conversation about what to get to eat.

"HOT DOG -- DO YOU WANT HOT DOG OR SOMETHING ELSE! FOOOOODDDD!"

All I could hear, while the Hurricanes earned another W over the Orangemen was, "buuuzzzzzzzzz."

Seriously, it amazes me every recruit - football, basketball, or lacrosse even - doesn't commit on the spot when they see Syracuse's home all glitzed out. At any other time? Not so much, but with ESPN in house, people losing their minds, the Carrier Dome suits Central New York just fine (for now).

And yet, even with Syracuse leading the college basketball nation in attendance in 2013-14, this still kind of surprised me: 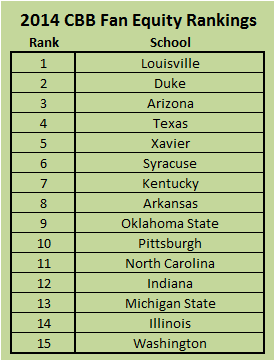 That's Emory Sports Marking Analytics' assessment of fan equity rankings. Where it ranks programs "based on statistical analysis of self-reported revenue data." SU fans are really in the top ten? It must be that beating Kentucky for tickets sold/butts in seats thing, right?

Okay, so...let's have Emory Sports Marketing explain further, shall we?

We create a statistical model of revenue as a function of team quality (winning percentage, NCAA tournament qualification, etc...) and market potential (conference affiliation, median income, area population, number of students, etc...) and then compare the model's prediction to the self-reported revenues. Yes, we get that this self-reported revenue data can be a bit quirky, but it's what the schools choose to report.

Honestly, the point of this isn't to harp on those rankings above (luckily for me) or to bring up Syracuse's leading the nation in attendance yet again. This is to ask the question: Are Syracuse fans really some of the best?

Or, more matter of fact: Is Syracuse really a good sports town?

Sure, the move to the ACC seemed to stimulate fans and onlookers last season for hoops. When Duke or North Carolina come to town in basketball crowds flock -- it can even push SU into some random top tens for fandom. I'd also bet Florida State coming to Salt City this fall will have tickets moving. But we've all been to a few Cornell games in December for basketball or have seen 35,000 showing up for a "big" game against Pittsburgh in football. Even lacrosse here, an area considered a hotbed for the sport, sees minimal fans unless Johns Hopkins, Virginia or Princeton is also on the field with the beloved Orange men.

In all reality, the reason I've given this so much thought this summer has a lot to do with the rising success of the Syracuse Chiefs. The minor league baseball team has called Syracuse home on and off since 1934, and yet it has been mostly a blip on the local sports fan's radar. Now? The Chiefs are essentially on top of Triple A baseball and...it's more of the same: a giant struggle to get butts in seats.

Which is understandable, I suppose. Minor league sports, with so many transactions changing teams on a daily basis, can be tough to wrap your heart around. Plus, the Chiefs have stunk for years and, in the past, haven't put forth a major effort to covet new fans. I mean, this is nothing new for teams like the Chiefs in Syracuse or any other city. Hell, just a couple of years ago the Syracuse Crunch experienced the best season in franchise history, and yet during the playoffs - THE PLAYOFFS - the team's owner called out fans for not showing up.

I know, there's a difference between the minor leagues and big time college athletics. NBT Bank Stadium or the War Memorial will never be the Carrier Dome in most people's minds. So Syracuse, like a lot of other cities in the country, may not be a "minor league" sports town.

But the lack of fan support at that level has to mean something -- there is a correlation to Orange fans, isn't there? As in, why is there so much silver showing when the Big Boy opponents aren't in town playing SU? Fair weatherdom? Bandwagoneers? Empty bleachers, at a baseball diamond or a basketball court, are empty bleachers, even when the phrase "tickets sold" can blur that line.

And yet, there is so much pride taken when the big board flashes the total attendance in Syracuse, New York. T-shirts are made off it. Syracuse routinely shows up, for basketball anyway, in someone's top-something because of it all. When the country is counting the Dome fills up fast and leaves so many of us with so many wonderful memories, wins and losses be damned.

But, all these years later, old debate or not, it still bothers me that when no one is really paying attention, it can be pretty damn drafty in there.