Triche leads his team in scoring in the three-game sweep.

The Syracuse City-State continues to gobble up territory like Trevor Cooney gobbling up three-point attempts. They say the sun never sets on The Otto-Man Empire and every game is a home game. That's true for all of the aforementioned spots and it's officially true of Italy as well now that former Syracuse Orange guard Brandon Triche has led his team to an Italian basketball league championship.

The former Syracuse University and Jamesville-DeWitt product scored a game-high 43 points as his Aquila Basket team from Trento disposed of Capo d'Orlando 90-75 to sweep the Gold League championship series today.

Triche shot 9-of-14 overall and 7-of-10 from the 3-point line. He added five rebounds, four assists and three steals.

Not bad for a first season in the pros. Triche led the team in scoring all season and dominated in the three-game series, averaging over 25 PPG across the three wins.

Afterward, the celebration was photographed, tweeted and Instagrammed...

@Bswish20 is among the few who can say they won a championship and was series MVP in their 1st season of pro ball pic.twitter.com/uyv8ooY2Ys 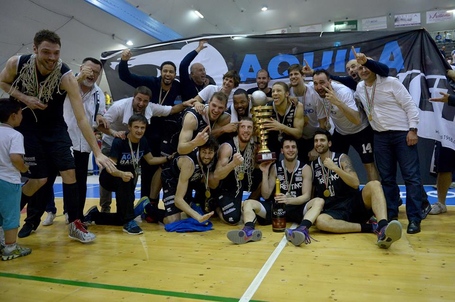