There's been a lot of talk and news lately that Syracuse is considering building a new sports stadium. Now obviously nothing has been decided and the stadium issue seems to be put on hold while the various government agencies work out the politics of it. Let's face it though, there are very few examples of times in the past few years where a sports team has asked for public funding on a stadium project and it hasn't eventually been approved. There's enough smoke at this point for us to say confidently one way or another Syracuse University will be building a new stadium or doing some serious construction on the Carrier Dome in the somewhat near future.

As someone who grew up just outside the city of Syracuse I can't imagine the city without the Dome. While there has been a fair amount of talk about what a new stadium would mean there hasn't been a lot of attention paid toward renovating the dome. I set out to make this the first of a series of posts where I argue for keeping the Dome and I attempt to use photoshop to illustrate my vision of a renovated Dome. I should first probably make a big DISCLAIMER: I am not an architect or city planner or accountant or any sort of professional involved with construction so these are just my personal views and ideas put forth to the public internets

Cost is one big issue in any sort of stadium related construction. I believe SU's task force estimated the cost of a new stadium as $400-500 million whereas I think a proper renovation could be achieved for about half of that say $250 million, again though I know nothing about these things so I want to take the cost out of it and argue for the Dome's other merits. The most important is history. If you build a new stadium you are essentially hitting the reset button on the last 30+ years of Dome moments. Sure we'll still remember the plays and games, the court stormings and last second comebacks but those memories will fade a little when they are replayed on the jumbotron inside a new unfamiliar building. There will be plenty of new moments and memories made of course in the new house to add to the old ones but they will forever be separated the way accomplishments from Manley or Archbold are now.

Besides history there is the uniqueness of the Dome itself. It speaks for itself really, there is no other college with a domed football stadium, no other college that plays it's basketball, lacrosse, and football in the same building. There aren't many pro teams with domed stadiums and no pro basketball teams with the attendance capacity. Not to mention that it's located right on the main campus of the University walking distance from the community it serves. In between the academic buildings the Dome stands out, some say as an outdated relic of a different era but I can't imagine looking up from all around Syracuse and not seeing the Dome with it's big roof sitting up on the hill majestically.

There are a few common issues or areas of improvement that can be addressed by either a new multi-purpose stadium or a renovated dome. Concessions, seating capacity, parking, A/C, sightlines, etc.. I'm hoping to make this a series of posts all related to this topic and with more photoshop so I'm not going to address every issue in this post. Today I'd like to concentrate on the air conditioning issue and with it the roof. But quickly on the subject of parking which is a hot button issue, yes parking is almost non-existent with the current Dome but I didn't see any detailed plan on how parking would be increased or improved in the SU task force documents that were released. So by keeping the Dome, yes parking will still suck but at least it shouldn't suck any more than we're accustomed to. 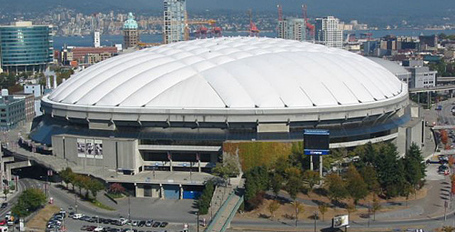 One of the flashy new features mentioned with a new stadium is a retractable roof. While I agree this is a fantastic idea I don't think we need a whole new building to get one. A retractable roof addresses a few issues. There is the crowd that argues people don't want to attend football games indoors when there is nice fall weather and then there is the portion of fans who remind you what Syracuse weather is like in the fall most of the time and you start to appreciate having a roof over your head. A retractable roof solves should eb able to make both crowds happy in the case of warm fall weather the roof could be opened giving an open air feel and letting lots of natural light onto the field while also still covering the seating areas. For those times when it's cold and rainy/snowy the roof could be closed and the Dome will function as it has. Of course the roof will be closed in the dead of winter for basketball season as well.

As for the often joked about fact that the CARRIER dome has no air conditioning, I'm not sure if adding A/C during a renovation would be necessary with a new roof. Perhaps this is an area where some cost savings can occur. On days when the roof is open you shouldn't need A/C and for times when it's closed and it gets hot from crowd heat like it can for big basketball games in January perhaps a venting system could be put in the roof that will allow airflow in. A retractable roof and cooling solution should allow the University to use the Dome year round including the summer months that right now are too hot. More Events = More $$ generated and ultimately we know that is what any stadium improvements are all about.

Of course the question is how do you add a retractable roof to a stadium that was build in the '80s and currently has a giant bubble on top of it? Well I think Syracuse should look no further than BC Place in Vancouver, Canada (Check it out here http://en.wikipedia.org/wiki/British_Columbia_Place).

The photo above shows what BC Place looked like prior to 2007, looks an awful lot like the Carrier Dome doesn't it? That's because they are very similar... basically slightly different models of the same building built around the same time. BC Place is a 55,000 seat domed stadium built in 1983 and the Carrier dome is a 50,000 seater built in 1980. BC Place has hosted a variety of sporting events and concerts just like the Carrier dome has, and then in the early 2000s as part of Vancouver hosting the winter olympics BC place underwent a large renovation that among other things replaced the old bubble roof with a cable based retractable one. If Syracuse is to add a retractable roof to the existing Carrier dome frame I believe this is the direction they are likely to take because it's been done before and there aren't very many... if any other examples to go off of.

The new roof in Vancouver has completely changed the look of the stadium. I made the photoshop images to show what could be a possible look if Syracuse were to install a similar roof system. 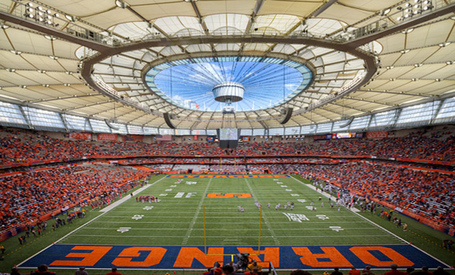 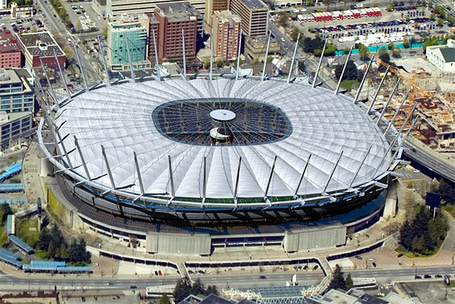 BC Place with it's new roof. I think it's safe to say the Dome would still stand out with a new roof like this 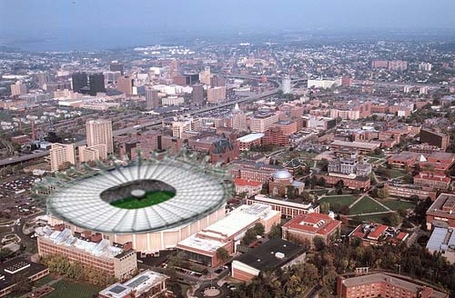 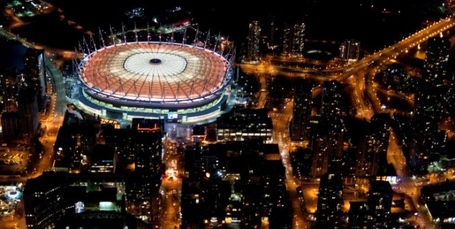 The roof can be lit up with colors spicing up the TV broadcast and the whole night Skyline of the City. Of course all Orange for gamedays but any colors could be used for concerts, events, to mark different occasions, etc. The Dome roof lighting could perform the same role the Empire State building lighting does but for the city of Syracuse. 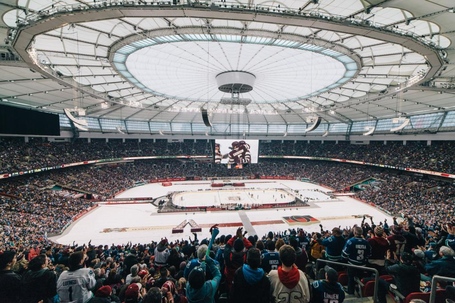 (Could that Hockey Rink be replaced with a center of the football field basketball court?)

You will also notice that the BC place roof has a video scoreboard jumbotron suspended from it. It's actually the second largest jumbotron outside of the legendary Cowboys stadium one to be hung like that. If Syracuse were to also incorporate this into their renovation it would add some interesting possibilities and enhancements to the event experience. It can be lowered for special events like concerts or for sports that don't need space for football kicks. Everyone loves more screens right? 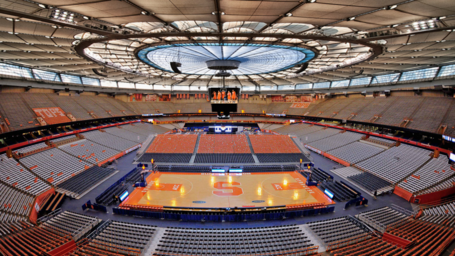 Would a center hung screen like this allow Syracuse to finally move the basketball court to the center of the Dome? Any wiring changes could be done at the same time. Or could Syracuse continue to keep the court in roughly it's current configuration and sell the seats in the opposite football endzone 200 & 300 levels?

Those seats have always been deemed too far away to see anything and yes then people would essentially be paying stadium prices to watch the game on a big TV screen but from what I've read that's pretty much already the case at places like Cowboys stadium anyhow. So why not jump on the bandwagon and let people pay just to be in the building? There is some merit to wanting to be inside the building to feel and join in the energy of the crowd even if you can't see the action as well. For the athletic department it's a no brainer... that would mean bigger crowds, even more exposure, and more revenue for the already prized cash cow of men's basketball. 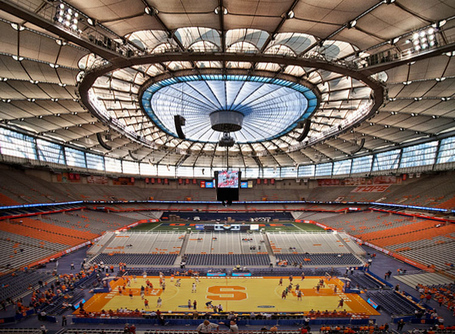 Another neat thing that BC place has is for smaller events like soccer matches. BC place is the home of the Vancouver Whitecaps of MLS and for MLS games there are barriers that are suspended above the lower bowl and below the upper deck to give the stadium a smaller more intimate stadium fell for games that only draw 20,000 or less fans. This would be perfect for Syracuse Lacrosse who could also benefit from the open roof for spring games. 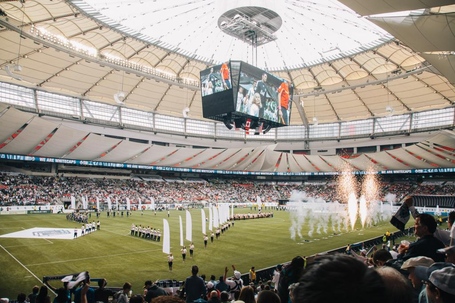 Thanks for reading some or all of this. As I said I hope to make this part one of a series of posts showing my version of a renovated dome as viewed through my photoshop skills. Regardless of where you stand on the stadium issue it's hard to argue that we're not living in an exciting and intriguing time as Syracuse fans. The Athletic department is certainly trying to step up it's game in all areas and I for one am excited to see what comes to be.