Get To Know Your Orange Man - #99 NT Ryan Sloan

It's back! The Get To Know Your Orange Man series, in which we profile every single member of the 2014 Syracuse football team, kicks off the newest edition with No. 99.

Share All sharing options for: Get To Know Your Orange Man - #99 NT Ryan Sloan

2013 Stats: As a RS sophomore, Sloan finally got a chance to play for the first time. In five games, he garnered two tackles.

2014 Projections: This could be Sloan's breakout season. He entered spring listed as the No. 1 DT across from Eric Crume and is part of a collection of big bosses that will see time on the defensive line. After that, it's up to him.

How'd He Get Here: Sloan was named to Newsday's All-Long Island 1st team in both his junior and senior seasons, finishing second in Bellport history in tackles (196). He chose Syracuse over offers from Rutgers, UConn and South Florida.

What'd Recruiting Sites Say: Rivals gave him the old two-star treatment but Scout saw something more and handed him three.

Links Of Wonder: We include this every year but it always bears repeating just how much Sloan went through to become a top-tier high school football player worthy of a scholarship to a D1 school, including losing his mom and suffering a significant eye injury. MSG Varsity detailed how Sloan lost his right eye due to an accident when he was three years old.

What Does Shafer Think Of Him: Shafer's looking at a quartet of guys to step up and replace Jay Bromley. "You hate to rely on the brand new recruits when they come in so I'm really putting it on Marcus Coleman and Eric Crume to step it up, and Ryan Sloan and Wayne Williams, between the four of those guys, especially."

Interesting Nugget O'Interest: You may remember the academic scandal that reared its ugly head surrounding Sloan's high school tenure. Two years ago, the New York Post reported that his coach and a Bellport official attempted to fix Sloan's grades to help him qualify at Syracuse. Sloan and all involved denied any knowledge of wrong-doing. Later, the Post reported that an investigation proved the allegations untrue.

Let's Get A Good Look Atcha: Not too much in the way of video but here's what he looks like in video game form... 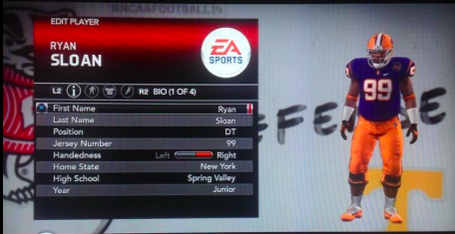