Get To Know Your Orange Man - #76 OG Jesse Wolf-Gould

It's the final year for walk-on Jesse Wolf-Gould. Will he finally see some action on the field?

Share All sharing options for: Get To Know Your Orange Man - #76 OG Jesse Wolf-Gould

2013 Stats: Much like the previous two seasons, JWG didn't play.

2014 Projections: Much like the previous three seasons, it's unclear if JWG will see the field. He's buried on the depth chart and is likely set for special teams duty at-best. That said, the offensive line is mired in injuries, which could mean that JWG finally gets his moment to shine.

How'd He Get Here: The walk-on stayed close to home and joined the Orange. Good idea.

Links Of Wonder: Wolf-Gould was getting practice snaps at center way back in 2011. Given SU's current center situation, he might be our emergency option this season.

What Does Shafer Think Of Him: Not sure but Doug Marrone was happy with JWG's effort as a frosh.

"If you throw someone in there that's never really played that position, it isn't fair to the unit," Marrone said. "Jesse Wolf-Gould played center in high school, and we put him in there today and he did a nice job for us. I give him credit."

Let's Get A Good Look Atcha: That's JWG on the right hanging out with his teammates in NYC. 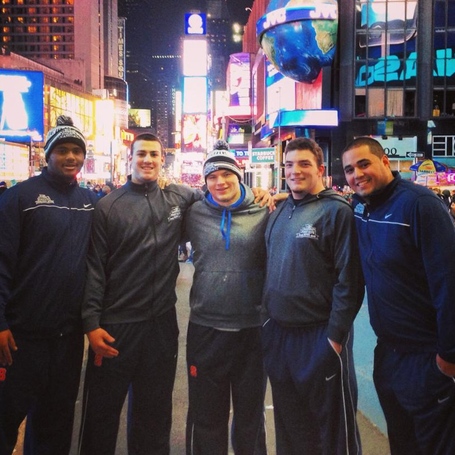