Scott Shafer: #Hardnosed, Fantastic Human Being, Makes You Want to Run Through a Wall For Him

Last night I met Syracuse head football coach Scott Shafer. And he lived up to absolutely everything you think he is, and then some.

Share All sharing options for: Scott Shafer: #Hardnosed, Fantastic Human Being, Makes You Want to Run Through a Wall For Him

Remember that article a few years ago about Doug Marrone being college football's "friendliest coach?" Well, I'd venture to guess if they tried the same article again in 2014, Syracuse's Scott Shafer would end up taking the crown.

On Tuesday night, SoCal Orange and SULA put on a Syracuse Football Reception for alums in the Los Angeles area, including an up-close look at the new uniforms, members of the athletic department and of course, Scott Shafer (as well as his wife, Missy, too). As a fan, you always build up moments like this one -- an opportunity to meet someone you watch on television and read about all the time -- and wonder if it will live up. Meeting Coach Shafer, I can tell you that not only did he live up to expectations, but he may have even surpassed them.

Far too much happened to recount it all, but some Shafer-centric highlights nonetheless: 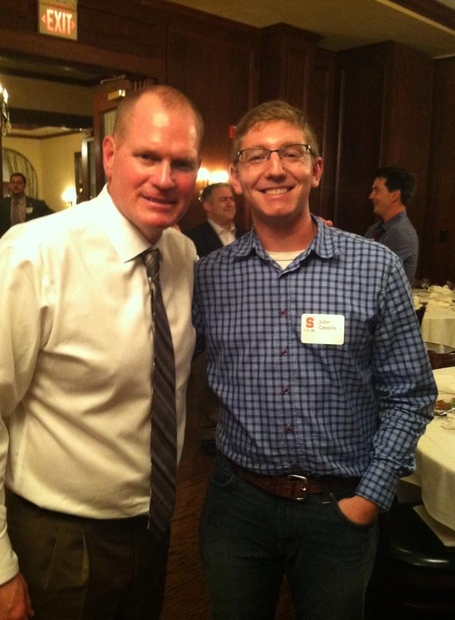 The event was only about 40-50 people, so that made everything a whole lot more personable and intimate, but y'know what? I think Coach Shafer would be able to control a room 10 times that size just the same.

Beyond just chatting with Coach, we got plenty of insight on scheduling (SU's played one of the toughest schedules in the country for the past 10-15 years now -- not surprising), practice facility progress (we're getting there!) and the uniforms, too. While we knew Syracuse is tight with Nike, I don't think we realized just how much (or at least I didn't) until talking with athletic department folks over dinner. We have several former Oregon Ducks (or Ducks staffers) within the department, which actually helped spear-head the current redesign. When you hear the passion everyone (including Coach Shafer) talks about these uniforms with, and the very positive player feedback, it's difficult to be as sour as maybe some of us were about them last week. Seeing them up close and in-person also helps matters. And I have to say, holding them and really getting a look, I've sort of come around. Yes, I wish there was an orange jersey (and don't worry, they've once again confirmed it's coming), but overall, the set looks great when right in front of you. Of course, none of the jerseys I saw (Terrel Hunt's, Cam Lynch's and Sean Hickey's) have a '4' in them (entertainingly, the worst number in the custom font), but nonetheless, the look has grown on me.

So there you have it. Great event put on by Syracuse, providing some great exposure for us SoCal alums to the football program and Coach, too. And as always, these sorts of things seem to serve as a reminder too, that a LOT of people read TNIAAM. Grads from 1974-2012 all mentioned the site while i talked to them, as did the athletic department members and yes, the Shafers (mostly Missy) do read what goes on around here as well. It's crazy to think about all that, but fun too, and a testament to everyone who's been part of this community over the years (whether it's been for six months or six years). Thanks, all (and especially Sean)!