#HopTalks: Get Your Questions In For Twitter Chat With Coach Mike Hopkins

Got a question you want to ask Coach Hopkins? Here's your chance.

Share All sharing options for: #HopTalks: Get Your Questions In For Twitter Chat With Coach Mike Hopkins

Last year, TNIAAM had the pleasure of hosting a Twitter chat with Syracuse Orange assistant coach Mike Hopkins. We learned about his affinity for Pearl Jam, his excitement about joining the ACC and his lifelong dream of becoming an MMA fighter. 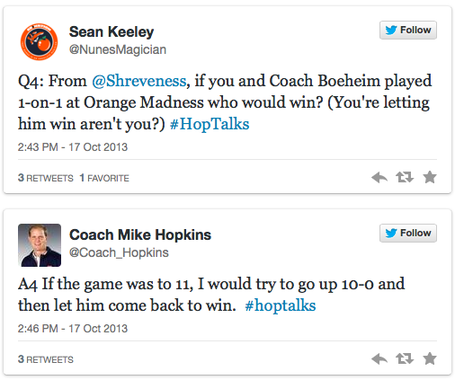 We had such a good time we thought we'd do it again.

But, we're gonna need your help. In the comments section, leave some questions you'd like to ask Coach Hop and we'll pick out the best ones to ask him. He seems pretty much up for anything so if there's something you want to know about former or current players, what it's like to work with Jim Boeheim or what the future holds for him and the Orange, let'r rip.

Then, meet us on Twitter tomorrow, make sure you're following Coach Hop (as if you aren't already) and enjoy the interview. We'll post highlights here on Friday.