Coleman checked in recently on Twitter to show off over 25 pounds of weight loss.

Before the 2013-2014 Syracuse Orange basketball season, center Dajuan Coleman was asked about his favorite candy (Starburst) and pizza topping (pepperoni), amongst other things. Clearly, he's been avoiding both and a whole lot more... 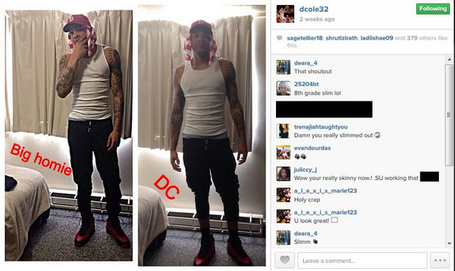 Via Donna Ditota, Coleman is down to about 258 from his previous high of 282. That basically puts him in the same weight range as Rakeem Christmas, who is also 6'9".

The weight loss might concern you but don't count Mike Hopkins among those worried...

"You know what's amazing about it?," Hopkins said. "He can't exercise and look what that diet is doing."

If anything, this reminds me of Rick Jackson, who went from a bit of pudge to a whole bunch of muscle over one summer, becoming a much better player in the process. Coleman has a lot to deal with given his injury, and he'll likely want to put some muscle back on, but if he can recover and improve as a player, this is probably great for him and his potential.

Who knows, maybe he finally came around on sushi.

SU fans, if you see Dajuan anywhere near Cheesecake Factory or that new Panda Express opening up nearby, please, form a human shield.