Beyond The Grey: Nine Things To Know About Syracuse's New Uniforms

There's more to these uniforms than just the colors.

Share All sharing options for: Beyond The Grey: Nine Things To Know About Syracuse's New Uniforms

I know, I know, you've got a lot of opinions on the color scheme in the new Syracuse Orange football uniforms. But, there's a lot more going on in those jerseys than just the colors. Let's dive in so we can get the full story.

"...the design incorporates influence from the University's "quad" buildings in the center of campus, as well as the modern gothic architecture seen in downtown New York City and on the Syracuse campus."

2. On the neck, you'll see No. 44 displayed in a military-inspired graphic patch that references the quad walkways (sure?), the "Legend of 44" and the team's annual practices in Fort Drum. Coincidentally, Nike co-founder Bill Bowerman is a member of Ft. Drum's 10th Mountain Division. 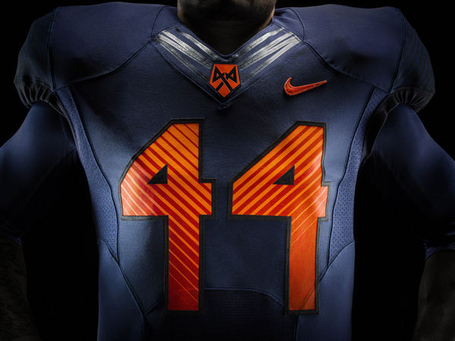 3. On the back of the white jersey neck you'll see "D.I.S.C.I.P.L.I.N.E" spelled out. It's a Scott Shafer mantra and I'm too lazy to spell out what each letter stands for.

4. You'll find "Lock the Gate" inside the neck of the blue & grey jerseys, another homage to a Scott Shafer mantra (though Lock The Doors or Lock The Dome would have been cooler).

5. Along with the requisite Block S, each helmet also features the words "Cuse" and "Orange" as well as an outline of New York State (natch) on the back. The Block S sits inside the outline where Syracuse is located.

6. I'm just going to cut and paste this whole paragraph about the Nike Pro Combat Hypercool system cause my brain will eat itself otherwise.

This fully integrated uniform system incorporates the latest in Nike's performance innovation, where the athlete's baselayer works in concert with the entire uniform – true innovation from the inside out. Lightweight padding is integrated directly into the crucial "hit zones" in the baselayer. Innovations include integrated Flywire technology in the neckline for reduced weight and lockdown fit over pads. Additionally, increased sleeve articulation provides better range of motion, and four-way stretch fabrication delivers a streamlined, shrink-wrap fit.

7. Jersey numbers are slanted to a 44-degree angle, a nod to the legendary No. 44 (which no one will actually be wearing but that's an issue for another day).

8. There are, in fact, orange jerseys and pants. It was first reported that they wouldn't show up until 2015 but this cryptic quote by Floyd Little implies otherwise...

"We're the Orangemen," declared Little, who ran gloriously for SU back in the '60s. "Orange is the color we all wear. I wear my orange ties and my orange patch. Orange is who we are. But everything changes. Everything evolves. You have to understand cycles...You may see us coming in all-orange."

9. Batman apparently played a role in the inspiration of the uniforms. At least, according to this collage of images. Sure.