So one of the big announcements is a home-and-home with Louisiana State University? Well, okay then.

I wasn't thinking of LSU when I got this email on Tuesday: 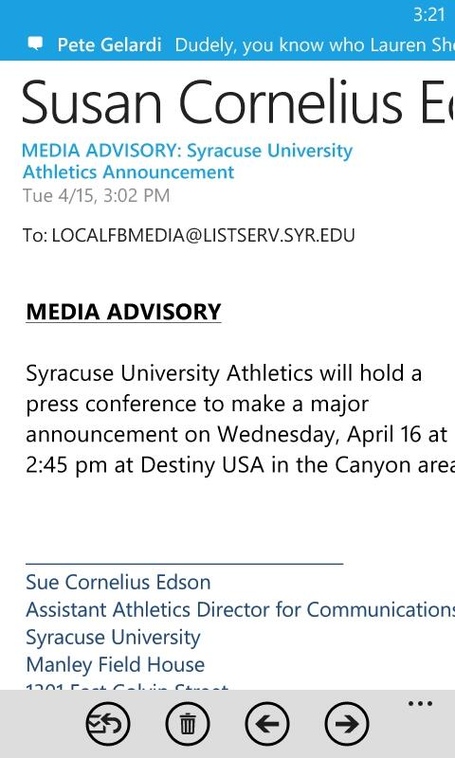 (Yes, I was getting a text from a friend at the same time this screen shot was taken. And yes, my friend Pete likes to call people "dudely" and "broham.")

A "major announcement" to unveil at Destiny USA! What could it be? Uniform changes seemed most obvious, but when Niko Tamurian tweeted this,

According to a source, there MAY actually be TWO major announcements made by SU at Destiny tomorrow. @CNYcentral

...I was a little thrown off. I mean, uniform changes have been talked about for so long around here that it's taken this long for SU to officially introduce them was surprising. But another "major" announcement on top of new jerseys? Hmm...A new arena? A new SU Athletics store to be housed at Destiny?

And then Sean Farrell goes and tweets LSU and Syracuse, home-and-home,

According to a source close to SU Athletics, the Syracuse Orange and LSU Tigers have completed an agreement for a home-in-home series.

All I can think about is watching the Orange get beaten down in the Bayou in a couple of seasons from now -- a loss that at its best would be deflating to a season and at its worst would be stunting to a program. Unless LSU takes a serious nosedive or Syracuse makes a gigantic leap, I can't envision that game ending well for Shafer's crew.

But a funny thing happened on the way to writing this scathing column. In my constant effort to see the other side of every argument, which is a coping mechanism for insecurity, I literally talked myself right into being excited for the Tigers. Well, at least for the 2015 game. A game that's actually going to be played in the Big Sauna right in Central New York. A game that could attract 48,000-plus fans.

Listen, I don't think Syracuse will win that game next year, but there are some reasons to at least think it could be more competitive than I originally believed.

I'll stand by original tweet, though, and, if given a choice, I would much prefer Syracuse to A) play nonconference games against more regional-based opponents like Penn State, Maryland or even West Virginia, and B) stay away from the real Big Boys like LSU and USC. More often than not a closer-than-expected loss like SU experienced against SC a couple of seasons ago is probably the most to be gained. Hosting the Terrapins isn't "sexy," but it's something of a regional rivalry and who needs more bling than Florida State or Clemson or even, every so often, Miami? The ACC does offer a lot in terms of competitive opponents, if you think about it.

Yet, we all know Daryl Gross is going to forever schedule marquee contests for the Orange, even if they would be better served to be apart of the preliminary card. SU is kind of a Koko B. Ware to Gross' vision of it being Hulk Hogan. And because of that, and because the nature of college football is to get on national television and collect a big gate, Syracuse will continue to put itself out there, even when "there" is the woodshed.

Which is ultimately one of the reasons I started to reconsider my initial #HotSportsTake on this "major" announcement. We can't do anything about Gross' scheduling, so we might as while embrace it and look for the silver linings. And it just so happens that come September of 2015 a silver lining could mean a packed Carrier Dome, a top-ten LSU and a the best chance at Syracuse "shocking the world" in decades.

Of course, the dark cloud to that silver lining should be one ugly blowout loss in a few years from now, but there's no need to think about the Orange playing at LSU right now.