Taking a look at a recent recruiting letter, we may have gotten some hints about Syracuse football's new visual identity system.

For months. we've been wondering about Syracuse football's rumored new uniforms. First we heard about some "platinum" and "chrome" elements. Then took a look at what might happen if the "de-blueing" of Syracuse sports continued. Despite all the chatter, though, there's been very little confirmation from Syracuse athletics. But perhaps we've finally gotten a few clues?

You might remember the "Original Orange" site that appeared a couple weeks back. And while it may have just seemed like a marketing device at the time (laying claim to Orange as "our" color, versus that of Clemson, Miami, Virginia, et al), it now appears to be part of the larger puzzle. Take a look at the screenshot below: 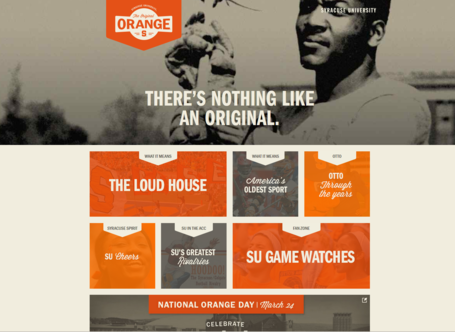 No blue in the branding. Old-timey font. Very pro-orange stance. This isn't just a National Orange Day promo. It's (likely) the jumping-off point for a whole new athletic identity system for Syracuse.

This recruiting letter, received yesterday by top kicking target Sterling Hofrichter, also seems to support the theory that old-timey fonts, all-orange branding and our typical "New York's College Team" slogan are the focal points of the identity system. Interestingly, it also leaves off the block 'S' (which is present on the Original Orange website.

The script you see there also happens to fall in-line with a uniform we were all pretty excited about recently, before wanting to burn it in a pile and forget it for all eternity... 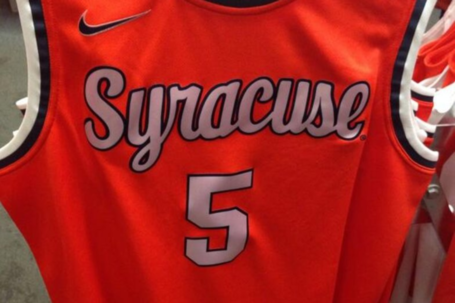 So could this be a full athletics rebrand, teased out by SU with the Original Orange website and the "throwback" jerseys, only to become full-time branding this coming season?

I mentioned on Twitter earlier that our athletic program has classically been a bit "non-traditional" and at times, downright wacky, and that it's always bugged me that recent branding has been extremely streamlined. So perhaps this is a return to what makes sense for Syracuse? An original, Orange-centric identity that not only calls back to our fun past (in all sports), but also distinguishes us from the various other "orange" schools in the ACC. I know this athletic department hasn't always been a hit on the brand side of things, but I'm hopeful this could be a very positive pivot as we enter our second season in a new league -- now, arguably, more visible to the national audience than ever before.

What do you think? Gross (yup, that was on purpose) overreaction to a recruiting letter and a website? Or maybe something more? Share your thoughts below. I'm sure we all have plenty to expand upon here.