The regular season ends today. And not a moment too soon.

The 2013-2014 Syracuse Orange basketball regular season has been full of highs (winning the Maui Invitational, embarrassing Indiana again, beating Duke in the Dome) and some lows (basically everything in the last couple weeks). One way or another it ends today when the Orange visit the Florida St. Seminoles.

SU has locked up the 2-seed in the ACC Tournament thanks to Duke's win over North Carolina last night. Still, a win here would help give SU something resembling momentum headed into the tournament. Given how iffy things have been, we are most certainly back in "a win's a win" territory.

The New York Post says Terry Cooney will be suiting up for this one, which weirdly makes me feel a lot better about the game. Feel like whenever there are other Cooneys involved, things go better. 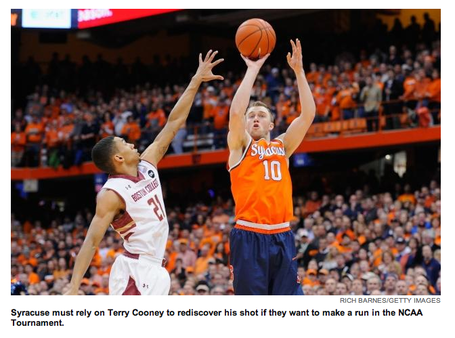 The game will be televised on the ACC Network, which means it's all over the friggin' place. Find the full list of local affiliates here. The game will also be broadcast for free on The ACC.com, which is way better than ESPN3, so, no complaints.

Gotta say, I'm surprised to hear that Jerami Grant will likely play. Figured Boeheim would shut him down before the ACCT. Let this be your 5,783rd reminder just how much JB hates relies on freshman big men. Sorry, Tyler Roberson.

Been told Jerami Grant likely will play, will possibly start. He looks fluid and moving fine in warmups.

Get the rest of your FSU history, rivalry, coach & player info over here.

Leave your pre-, in- and post-game comments below. G'ORANGE!