Syracuse vs. St. John's Lacrosse Preview: Back To The Big East (By Way Of Georgia)

Syracuse will travel to the Peach State to face St. John's in the Cobb County Lacrosse Classic. A strong attack leads the Red Storm as they try to take down the Orange for the first time in program history while Syracuse will try to right the ship and get back to its winning ways.

Share All sharing options for: Syracuse vs. St. John's Lacrosse Preview: Back To The Big East (By Way Of Georgia)

After a rough couple of weeks for Syracuse basketball and lacrosse fans, I think we could all use a win right now. This weekend SU could get that opportunity as they face former Big East foe St. John's in the inaugural Cobb County Lacrosse Classic played in Kennesaw, GA on Saturday.

The event is hosted by LB3 Lacrosse, an instructional lacrosse organization that has a presence in Philadelphia, Atlanta, Greensboro, St. Louis and throughout the state of Florida. The organization is the baby of former Syracuse All-American Liam Banks and has employed a number of former Syracuse players including recent graduates John Galloway and Joel White. The game will be played in Fifth Third Bank Stadium home to the Kennesaw State Owls. Built for soccer, lacrosse and football, the stadium has a listed capacity of 8,300 and is just four years old. 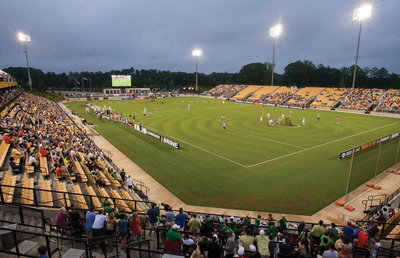 St. John's entered the toughest stretch of their season this week taking on Drexel on Tuesday, Syracuse Saturday and Georgetown on the 15th. After a one goal loss to Virginia and a one goal win over Albany, I thought Drexel might be better than their rank gave them credit for (currently #17/18). However, after watching the Dragons play St. John's I did not walk away very impressed. The Red Storm, with the exception of the second period, hung tough with Drexel. The 16-11 score makes it seem a lot more lopsided than the game actually was. The conclusion being that Drexel and St. John's are part of that mediocre pack of teams stacked up in the second half of the rankings, and yes Syracuse might be right there with them.

Saturday will be John Desko's 250th game as the head coach of the Orange. Syracuse is 7-0 all-time against the Red Storm. Over the last two seasons, these two teams have played three times (in 2012 they met twice, the second time in the Big East Championship). The Orange will need this win as they will follow up the Cobb County Classic with a three game stretch featuring trips to John's Hopkins and Duke before hosting Notre Dame. The St. John's-Syracuse game faces-off at 4 pm and will be broadcasted live on WTKW 99.5.

The Red Storm offensive unit is very balanced. Entering the week, Syracuse and St. John's are atop the nation in shot percentage. The Orange place second on that list at .384 while the Red Storm land at the fourth spot with a .380 shooting percentage. Dylan Donahue leads the nation with a .667 shooting percentage while Henry Schoonmaker and Hakeem Lecky can also be found in the top twenty. The attack is anchored by a trio of seniors holding impressive resumes. The most notable of the first line is 2012 All-American and 2013 second-team All-American, Kieran McArdle. As a junior, McArdle led the Big East in goals, assists and points and led the nation in assists and ended the season second in points per game. He has followed that up this year with 18 points, 8 goals and 10 assists, but Drexel held him to just 1 goal on 1 shot. Fellow line mate, Colin Keegan, put up 26 goals and 5 assists in 2013 and so far in the Red Storm's 2014 campaign Keegan has 5 goals and 1 assist. The Springfield, PA native snagged 4 points against Holy Cross and 3 goals, 3 assists versus Drexel. Keegan has at least one goal in each game played. New Jersey native Kevin Cernuto netted hat tricks against Holy Cross and Siena and finished Tuesday's tilt against the Dragons with 2 goals and 2 assists moving him to fourth on the St. John's all time points list. Cernuto has 8 goals and 6 assists on the year.

Prior to this season, St. John's head coach Jason Miller stressed the importance of his midfielders being able to step up and help the attack on offense. Senior Ryan Fitzgerald has put the midfield on his shoulders and is off to a hot start this year with his 9 goals and 2 assists through 4 games. Fitzgerald has never had more than 13 goals or 18 points in any year of his career but is looking like he will break both of those this year. Fitzgerald enters Saturday's game coming off of back-to-back hat tricks against Siena and Drexel. If the SU defense gives Fitzgerald room he will hit shots, and we do not want a repeat of the James Pannell situation from Saturday. Stefan Diachenko has 6 goals on the year but more impressive is that his 7 goals have come on 8 shots. Senior Connor Mullen has had some trouble finding the net this season, but that is not his strength. He has excellent dodging ability which can open up the offensive zone leading to good scoring opportunities for his teammates. After starting all 4 games, Mullen has 4 assists and 5 groundballs. Although he only holds 10 career goals, all coming last season, he has picked up 44 career groundballs. The third starting midfielder, Eric DeJohn, might be a familiar name to Syracuse fans. A Jamesville-Dewitt product, DeJohn committed to Syracuse and was listed on the SU roster for 2012 and 2013 before transferring to St. John's this past year. Other than appearing in a scrimmage against Hofstra last year, DeJohn did not see any playing time while at Syracuse. In his first year with the Red Strom the midfielder has 2 goals and 2 assists. The St. John's midfield, and team as a whole, is not very deep and is relying on its starters to burden much of the load.

SU will not play a team that is currently ranked worse in faceoffs than St. John's. Coming into this week St. John's held the 58th place nationally. Syracuse occupied spot number 46 on the same list so maybe this will be a good matchup for the Orange. Against Drexel the Red Storm did not help themselves finishing the game 8-30. Mario Carrera is the St. John's FOGO but he only has a .395 win percentage. Assuming Chris Daddio gets most of the faceoff opportunities, the key for him will be not turning over the ball after the win. Daddio has a team leading 6 turnovers this year. In past years the Orange would have destroyed St. John's in the f/o circle, but I think at this point they will take going .500.

In 2013, the Red Storm allowed 11 goals per game and only mustered 6.46 caused turnovers per game; as a defensive unit they were not stellar. With a .783 clearing percentage, 6.33 caused turnovers per game and 10.67 goals allowed per game, St. John's has not improved very much from last year. The starting defense for St. John's includes Mark DiFrangia, Andrew Viscusi, and Joe Addona. Junior Mark DiFrangia finished last season second on the team with 17 caused turnovers and had 29 groundballs to add. This year DiFrangia has already snagged 15 GBs with 2 caused turnovers. Four-year starter Addona only has 2 groundballs and 3 caused turnovers on the season. Senior Drew Viscusi has 14 GBs in 2014, nearly reaching his previous season record of 17 reached in both 2013 and 2012. Against Drexel, the Defense let down their goalies, giving up 42 shots, including 17 in the second period. The longpoles will need more help from their defensive midfielders to restrain the Syracuse shooters.

St. John's lost their starting goalie Jeff Lowman to graduation last year. Lowman left some big shoes to fill, finishing last year in the top 15 in save percentage and saves per game. Freshman Joseph Danaher has filled in starting all 4 games. Danaher has a .466 save percentage and an 11.6 goals against average. Harry Burke made one start as a freshman last year filling in for Lowman against Villanova, giving up 13 goals and making 13 saves in a 13-11 loss. In their last game against Drexel, Coach Miller pulled Danaher in the second period in favor of Burke. Combined, the two net minders made 7 saves. As it stands right now, Danaher should get the start against the Orange. Getting a lot of shots on net will be key for Syracuse on Saturday, which considering St. John's defensive unit, will be very possible.