With the assumption that incoming freshman Kaleb Joseph will take over at point guard next season, just how often is the guy handling the rock such a youngen?

So I had this convo on Twitter last night in the wake of Tyler Ennis announcing that he's leaving Syracuse for the NBA. 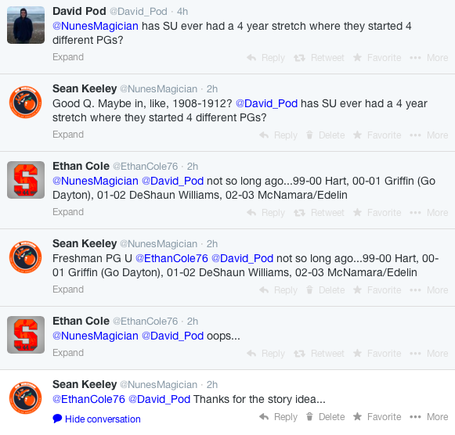 And so it got me thinking…with the assumption that incoming freshman Kaleb Joseph will take over at point guard, which is indeed an assumption at this point, just how often is the guy handling the rock such a youngen?

I went back to 1996-1997 after Lazarus Sims graduated and Jason Hart stepped in to the role. 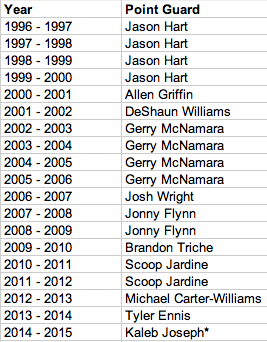 And then I looked at graphically to see what year the starting PG was each season... 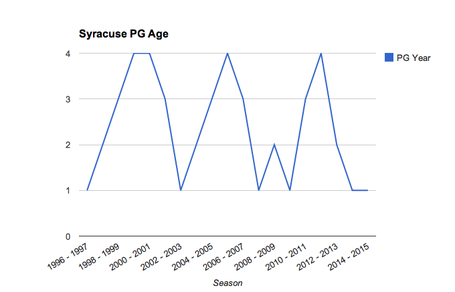 So what do we learn? Well, the era has been pocked with a few different PGs who transcended the odds and maintained their spot for four seasons (Jason Hart & Gerry McNamara). Brandon Triche was also pivotal for four seasons but his role shifted based on whether or not he was required to take the point. For the most part, there is stability at the PG spot over time.

As noted in the tweet, if Joseph is the starter next season, it will be the second time in fifteen years that four different players have taken on the role in four consecutive seasons. I don't know if that's good or bad but it's trend-ish nonetheless.

Joseph would also be the sixth freshman to take on the role of starting PG. Three of his predecessors went the distance for four seasons at SU (Hart, GMac, Triche), one of them left after sophomore year (Flynn) and now one has left after that single season (Ennis). The last two are also the most recent cases. Couple them with MCW and, boom, you've got yourself a trend.

Does this signal a shift in what we should expect from talented, young point guards? I don't know. I think it's likely still a case-by-case basis. But I suppose if I'm going to draw any conclusion, it would be that it's now more likely than ever that today's young point guard will not be tomorrow's senior leader.

Such is college basketball these days.