After the First Weekend of the TNIAAM 2014 Bracket Challenge, The Leaders Are...

Share All sharing options for: After the First Weekend of the TNIAAM 2014 Bracket Challenge, The Leaders Are...

So after North Carolina went down on Sunday, the first words out of my mouth were ‘When was the last Sweet 16 that didn't feature at least one of UNC, Duke, Syracuse or Kansas?!?!?' Thankfully, I'm always looking for a excuse to play ‘hyperlink rabbit-hole' on Wikipedia, so this is what I found.

That's right, Gerald Ford had not yet rung in our Nation's Bicentennial the last times we saw none of those teams in the Sw...whatever they called it then.

Thank you for indulging me on that ‘lil tidbit of perspective. Now, on to what you really care about: The extent to which your dumpster fire of a bracket rages.

The full standings can be found HERE.

There are three teams tied at the top: 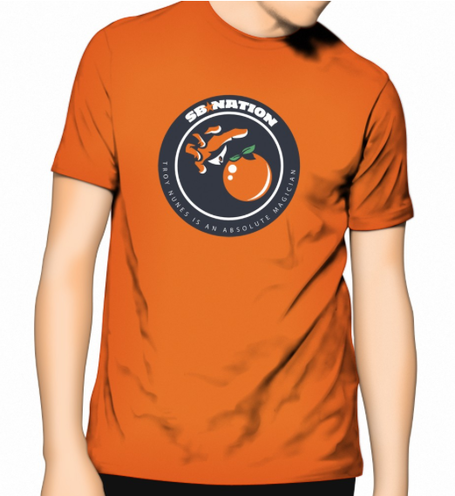 One of the tees in the TNIAAM store from which the eligible winner can choose.

Of those three, only BN still has their Final 4 intact, the other 2 has Syracuse in Dallas (we still are, in Mookie's Revenge's mind).

I'd normally give the ‘Futility Award' at this point to the last-place, full-bracket team...in this case it's ‘Dylan's Dandy Bracket' with 23pts thus far. However, Dylan still has several 8s & 4s left, so his potential total is well above 100.

One spot above Dylan lives someone who's future looks much more bleak, and that's Sisko24's Unrivaled Bracket. The Sisko kid is not a friend of the bracket, and it's ‘unrivaled' in that Sisko has a potential to earn all of 42 points. Sisko24's Sweet 16 is Pitt, Tulsa, Syracuse, New Mexico, Virginia, Harvard, UNC, UConn, Ok St., Oklahoma, Baylor, Wisconsin, Kentucky, Manhattan, Duke & Michigan. Oops.

The Dance gets back to action tonight with some intriguing early matchups, followed by a couple games that should just be a case of teams taking care of business. However, with this tournament, you never know what's going to happen. I wouldn't put it past San Diego State to do something amazing, especially since no one will be watching.