One Year In, and Syracuse is Still Without a True ACC Rival

Approaching the end of our first year as an ACC school, SU remains without a bonafide rival. But 2014 reacquainted us with an old "enemy", and introduced us to a few more.

Share All sharing options for: One Year In, and Syracuse is Still Without a True ACC Rival

As many of you regular readers can attest, we at TNIAAM do have a thing with rivalries. Perhaps it is our insecurities following the dissolution of the Big East and uncertainty regarding when and how often we'll get to dunk a basketball in the face of Georgetown's best player, however Syracuse's move to the ACC has left us without a true conference rival...and that's just not cool with a lot of us...myself included.

A year ago, I penned a piece asking whether Syracuse football would find a rival in the ACC. Rather than simply offer an opinion on our various candidates, I tried to develop a pseudo-qualitative measure that could definitively indicate whether a particular school is indeed a rival using two variables: familiarity and contempt, and plotting the schools based on how high each scored against those variables. The matrix looked like this: 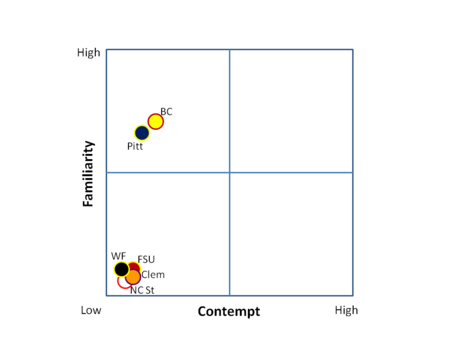 To recap, in order to be in the true rivalry category, one had to be in the upper right quadrant. To get there, a school had to have certain characteristics consistent with achieving familiarity and contempt:

1) Do you play the other school every season?

2) Is the other school the other major football program in your state, a neighboring state, or within a major metropolitan area?

3) Is the other school academically on par and filled with students who chose their school over yours?

4) Do several of your family members or close friends have a degree at one of the two schools?

1) Have the schools regularly played each other when the stakes were high?

2) Has a notable "moment" taken place on or off the field between the schools?

3) Is the pride of the student body and alumni meaningfully at stake when the game is played?

4) Has there been a history of borderline criminal mischief associated with the schools?

One Year In: BC inches closer, Clemson and Duke enter the radar 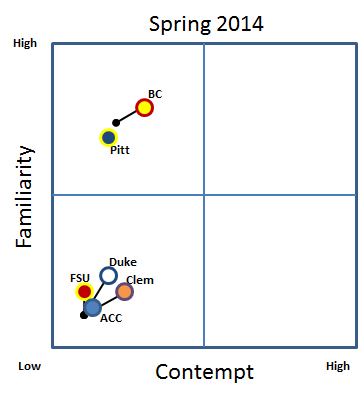 Nearly one year in as members of the ACC, and a true rival still hasn't been established, however a select group of schools have separated themselves as emerging rivals, with one in particular inching closer. Let's take a look at our main ACC antagonists:

Our oldest adversary, Boston College came back into our lives with a vengeance on November 30, 2013 when Terrel Hunt's 8 yard TD pass to Josh Parris sent SU bowling, ignited a full-on dance craze, and otherwise put a big-time damper on The Eagle's surprisingly strong 2013 season. We left delighted. BC??? Not so much.

Fast forward to February 20th, and Boston College paid us back with interest with a stunning 62-59 overtime road win against the 25-0 Orange. The 6-19 Eagles, possibly buoyed by the emotional loss of their longtime Sports Information Director Dick Kelley, outplayed The Orange and started an offensive slump that SU never seemed to stop.

Add these emotional games to the heightened visibility of SU-BC contests as a result of The Orange Eagle Trophy, and BC has emerged as the closest school resembling a true rival through the 2013-2014 season.

If you were to tell a Duke fan -- well the ones who didn't leave the bandwagon last week -- that Syracuse is a rival, most would spit sweet tea out their nose and gruff that North Carolina is a rival...Syracuse is not. They may be right, but the two games played between the mens' basketball programs in 2014 were so good, so intense, that at the very least Duke/Syracuse basketball has established itself as nominated for consideration as an emerging conference rivalry. Neither Mike Krzyzewski nor Jim Boeheim would argue that sentiment.

Based on the variables of familiarity and contempt above, there is no real argument for Clemson and Syracuse being a rival in 2014. We played each other across a number of sports, their football team took us to the shed, our basketball team took them to the shed. No biggie, right?

If you put someone who takes themselves so damn seriously in the same room with someone who doesn't you are more often going to get something aaawwkwaaard. And that is exactly what we have with Clemson. Look, I know they have a passionate fanbase with lots of tradition. And I can't pretend to understand their football culture any more than I expect them to understand ours. But when pretty much every school in a 400 mile radius finds you generally insufferable, and hyper-serious, perhaps you should start searching for a sense of humor...just in case you come across someone from outside the 864 area code.

2014 saw Tyler Ennis put the Oakland Zoo through a crash course in the Kubler-Ross "Five Stages of Grief", and we have been playing these guys for ages, but there's just something about Pittsburgh that fails to raise the blood pressure of Orange Nation. We all have an acquaintance in our lives whom we have known for ages...someone who has been in our classes in school, played on the same little league team, or lives down the street. You know who they are. You have no reason to not have some form of a relationship with them and you'd never wish them harm, but somewhere along the line you have both decided in your own minds that it just isn't worth the effort to do anything about the fact that you just don't give a sh*t.

Ladies and gentlemen, this is The University of Pittsburgh.

Outside these schools, there weren't any others who really came across as separating themselves from the pack of ACC schools that we'll get to know better over the years. We shared a laugh or two with Florida State, cowered in fear over multiple epic fails involving Georgia Tech and the city of Atlanta, but otherwise used 2014 to settle in with our new neighbors. Rivalries will still take time, but if we remain patient, there will be schools who will make the heart race and the blood boil. Only time will tell.