Thanks, Obama: President Picks Syracuse to Lose In Round of 32

The President has low expectations for Jim Boeheim's team.

Share All sharing options for: Thanks, Obama: President Picks Syracuse to Lose In Round of 32

I voted for you twice and this is how you repay me?

In the South Region, the president picked No. 6 seeded Ohio State to upset No. 3 Syracuse in the third round. Imagine that -- a former presidential candidate wanting to make the people of Ohio happy.

In fact, Obama went almost strictly chalk into the Sweet Sixteen except for OSU over Syracuse and UNC beating ISU. Clearly, he's buying into the liberal media bias against Syracuse. This is why I prefer to get my Syracuse updates from Fox News. They shoot straight (and hate poor people).

Well, it's still better than the time he spelled the name of the school wrong. Though, next year, let Biden do the bracket. Cool? 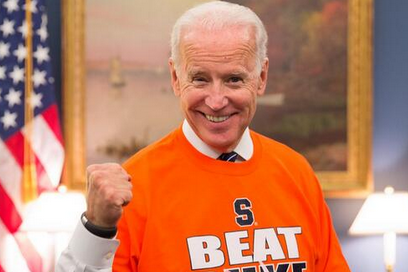