FiveThirtyEight: Syracuse Has A 1% Chance To Win 2014 NCAA Tournament. Oh.

According to Nate Silver's site, the Orange have an 89% chance of beating WMU. After that, it gets tricky.

Share All sharing options for: FiveThirtyEight: Syracuse Has A 1% Chance To Win 2014 NCAA Tournament. Oh.

The Syracuse Orange are entering the 2014 NCAA Tournament as a three-seed but the odds seem to be against them given their late-season drop-off.

And if Nate Silver's FiveThirtyEight site is to be believed (and they're pretty good about this whole statistics thing), the odds are EXTREMELY against them to make a run and win the whole thing. 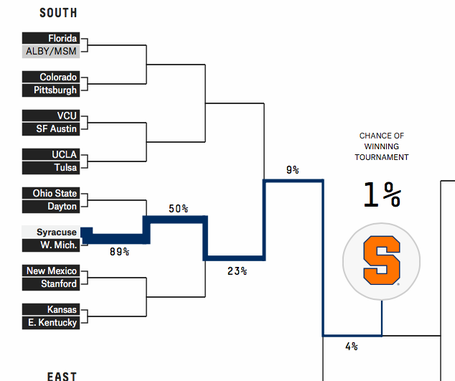 So the good news is that we've got an 89% chance to beat the Western Michigan Broncos in the second round. After that, it's apparently a toss-up against either Ohio State or Dayton. Once we get to the Sweet Sixteen, things look bleak (presumably against Kansas). And if we happen to churn it out to the Elite Eight, well, the odds are getting slim.

Of course, you can also go the Scott Shafer route ("Stats are for losers") or the Han Solo route ("Never tell me the odds!"). Whatever makes you feel better.

Incidentally, the team that Five Thirty Eight predicts will have the best odds at winning the whole thing? 4-seed Louisville (15%). They're followed by 1-seeds Florida (14%) and Arizona (13%) as the only other double-digit folks.

Hey, things could be worse. Georgetown has a 0% chance. Remember that.