Syracuse Basketball: In Defense Of Blue

We didn't lose because we wore blue. We lost because we mismatched (and, maybe, just a little bit because we played terribly).

Share All sharing options for: Syracuse Basketball: In Defense Of Blue

Early on in the game against the Boston College Eagles Wednesday night, when it looked like it was going to be yet another frustrating performance by the Syracuse Orange, I had a disturbing thought.

My fear is that this is a way to trick us all into saying we hate the blue shorts so SU can get rid of the color and add more gray.

Then, the shocking end result happened. And what followed was a damn near riot against the idea of Syracuse ever wearing blue again.

Whoever designed this Syracuse uniform combination probably has a mustache that he twists at the corners while cackling to himself.

Hell, one of my compatriots in arms even wrote a scathing open letter to SU about never wearing blue again. Ever.

Please know we appreciate everything you do for our University, and as a fan community we remain confident that our team will recover from this loss stronger than ever. But while we all pick up the garbage of last night's game and pull ourselves back together, we politely ask that one item is not kept, but discarded in the trash altogether...the color blue.

I feel like one of those Scottish nobles pleading in vain to his troops during Braveheart as the mighty English army appears.

"Stop, men! Do not flee! Wait until we've negotiated!"

*And possibly because we played awful, awful basketball. That may have had an effect in some small part.

Yes, we're the Orange. We should always be wearing orange first and foremost. That's a given. But we're always going to need a highlight color. That added touch that separates us from the Clemsons, Oklahoma State and Oregon States. And that color is blue. It has been for a very long time.

Just look at our football program. It can't get enough blue. Couldn't in the 90's and couldn't this season.

And here's the thing…this is your alternative. 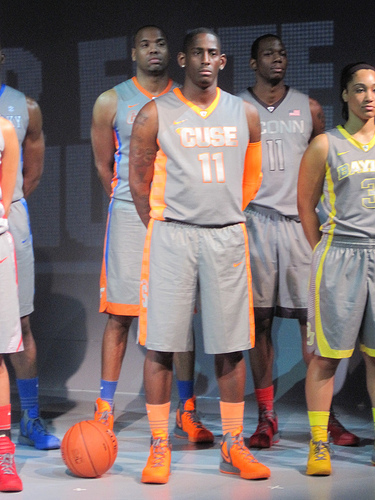 Gray. Drab, uninteresting, sad gray. Or platinum, whatever you want to call it. Same thing.

Syracuse basketball has been de-blueing the program for a few years now The normal uniforms have no blue. The court has no blue. And rumor has it that future football uniforms might follow suit.

All of this means we're looking at a future that is gray. Retract the roof all you like but when the aliens look down at us, they'll wonder why, of all the colors we could have chosen, we went with gray over blue.

Nike will invariably throw another dumb uniform combo our way next year and we'll wear it all the same. But chances are the powers-that-be are going to point to Wednesday as proof that Syracuse fans don't really want blue. The truth is, we don't really want horrible uniform ideas. Let's try not to confuse the two.