TNIAAM's esteemed basketball panel deals with the most important things in the world of the Syracuse Orange this week.

Welcome back to the Syracuse basketball roundtable! This week, we forgo talking about the result's of last night's game because things like that are sad and anger-inducing, plus these questions were written up on Tuesday. Can't pretend it never happened, but we can certainly ignore it (which is exactly what we'll be doing here).

As is and will be the norm all season, we're chatting about Syracuse basketball, the ACC and anything else that might come up in the never-ending soap opera that is Jim Boeheim's Orange team. Join us below...

What's the worst unfounded criticism of SU you've seen this past week?

Chris Daughtrey: I'll be honest, I've been off the blog grid for the last 5 days or so, so I haven't heard much. So, if I had to guess what those criticisms are, it'd be that Syracuse can't be the best team in the country because they're not blowing teams, even mediocre ones, away. Which we know is bullsh!t. That's just Syracuse's M.O. for the season; Wisconsin East. Bo Ryan gets away with it because he's perceived to be getting more out of less talented and athletic (read: white) players, where Jim Boeheim gets the cream of the crop. People think that, with the talent on hand, Syracuse should be blowing everyone out. Clearly, those people are delusional.

Matt McClusky: Honestly, most of the "criticism" is contrived talking-points and is usually prefaced as such: "They're undefeated, so this is picking nits..." For me, if they're talking about you, nitpicking or not, it's always better than if they're aren't talking about you. It's February 20 and the national media is trying to find flaws in a previously undefeated team, I think we should all relax and enjoy these #firstworldproblems.

Jeremy Ryan: I saw someone complain that they didn't like the throwback blue shorts didn't match with the orange script jerseys. I think that was extremely unfounded. That look is pretty sweet.(Ed note: TAKE IT BACK!)

John Cassillo: Up until last night, the "bad offense' excuse was mostly unfounded. Syracuse's offensive efficiency rating was actually top 10 in the country, showing the lack of scoring was a product of pace. Shows how much "pundits" know...

Why aren't we allowed the injury excuse every other top team gets?

CD: Because Syracuse's injuries haven't been to its top players. People who don't follow the Orange closely don't recognize how important Baye and Coleman are, despite limited minutes and production from both. Most people will recognize the difficulty in being down to only one true center, but most don't recognize that the strength of the position for SU was the "center by committee" approach. That's gone and I think it's part of the reason the Orange have struggled of late.

LN: Because it hasn't really mattered yet. Syracuse is undefeated. If they play shorthanded due to injuries and lose, it will definitely be a topic of conversation.

MM: Super interesting question, why has everyone dismissed the absence of the Syracuse's starting center (a nationally acclaimed recruit) and its key senior backup? I guess because Coleman and Keita are fairly forgettable in terms of statistical impact, but everyone seems to ignore that SU has played the majority of the last four games down two big men (10 fouls). Keita's back but Coleman's absence is a major trouble spot for this season and next and the fact the Orange keeps running off Ws is even more impressive

JR: I'm not sure I buy that premise, but to answer the question it's probably because SU's core players are relatively healthy. Yeah, Coleman is out and Keita missed a few games, but the five guys who play the vast majority of minutes are fine. This isn't like Arizona or Michigan State, who are missing key players who were being counted on for key contributions.

JC: Everyone's brought it up -- it's because Keita's never thought of as someone who makes this team tick. Syracuse is extremely group-oriented, and much less individually-focused, but that gets lost in hype for Tyler Ennis, C.J. Fair, Jerami Grant, etc. Every player in this rotation matters, and Keita's a big part of that, to those who follow the team closely. Also: people are pretty lazy when it comes to research.

Orange fans do an awful lot of complaining despite having the No. 1-ranked team? What's our issue?

CD: Orange fans do an awful lot of complaining despite having the No. 1-ranked team? What's our issue. We're new to the college basketball grown ups table. If Syracuse wasn't widely considered elite before, they are now. So fans are clamoring for Syracuse to maintain the place its rightfully earned.

LN: I think it's a defense mechanism; they're waiting for the other shoe to drop. Having gripes built up and stored away will do just the trick when it finally does.

MM: Fans are biased, period. Seriously, Yankees fans complain about negative attention (I should know, I'm one of them)! I think the Orange fan is still very uneasy with this recent ascent into basketball elite over the past five years; it wasn't that long ago people thought Boeheim was just a recruiter and that SU was a "football school." That's changed now but that chip is still sitting atop shoulders for a lot of people.

JR:I have found that, generally speaking, there are some people who aren't happy unless they have something to bitch about. I guess that extends to basketball fandom. Those 'fans' should try following a team that hasn't been good for 30 years - like Virginia, for example. Now THOSE fans have legit gripes.

JC: I'm among the worst in this department. Because we've elevated our station in college basketball, we're now insisting it be recognized and that we're paid the same deference as squads like Duke, Kansas, UNC, etc. So whether we're ranked 10th or 1st, there's still a perceived amount of disrespect coming at us from some part of the web. That sounds very Nixon-esque, since we even have a list of enemies, technically. But the paranoia is what it is.

What's the key to beating Duke at Cameron Indoor? We know they'll be shooting a ton of threes...

CD: Really, the same as it was for the game at SU. Attack inside on offense and try to make the Dookies miss a lot from deep. Duke it going to take (and likely make) a ton of threes, that's a given. The key is to make sure they don't make a ton of twos as well. Schematically, I don't think either team can do anything different. Duke has too many shooters for Syracuse to guard. Duke doesn't have the defensive talent to stop Syracuse inside. This is really an example of the game in its simplest form... score more points than the other team.

LN: Composure. That will be huge in Cameron. Oh, and scoring points. That would be nice. Realistically, though, if Syracuse is struggling on offense, the solution is for the defense to adjust during the game. While great, it hasn't been perfect. If they get scored on in a play, they need to be able to read, anticipate, and prevent the score the next time. It's like they say -- score on my once, shame on you. Score on me twice, shame on me. Or something like that.

MM: I think this is an All-Eyes-On Game for Tyler Ennis. Ennis may not need to put up 25 points, but he'll to play, well, just like we expect him to play, picking up assists, limiting mistakes and hitting those running floaters in the lane. Ennis' abilities to create offense almost at will could be the difference in Durham. The Orange can win any number of ways, as we've seen, but this game is special and a special player tends to do special things in those situations.

JR: Focus. That is going to be a crazy atmosphere on Saturday. SU knows what they need to do to beat Duke, namely close out on shooters and control the defensive glass. If they do that, they should be able to win.

JC: Don't do what you did last night. Beyond that, guard the perimeter and play tough inside. Duke will push the pace, so meet them there and take (and make) efficient shots. And don't just count on us getting bailed out by some late-game heroics. Just because it happens a few times, doesn't mean it's a guarantee.

Which remaining regular season game is the most likely loss for Syracuse?

CD: Probably this Saturday's game at Duke. I said after the first meeting that, if they played that game 100 times, it'd end up even at 50 apiece. I still feel that way, which means Duke is due for a W. And, honestly, I'm fine with that. If Syracuse's one regular season loss is at Cameron, that's a hell of a run.

MM: Taking Duke out of the equation? I'd say at Maryland is a classic quick-turnaround trap-game and then at Virginia could certainly be a loss, too. But the thing is, we're sitting here at the end of February and there isn't a team in the ACC, or the NCAA for that matter, that Syracuse couldn't beat. Seriously, if the Orange walks out of Cameron with a victory, I'll go all-in and say SU runs the table.

JR: Duke. They're the best team, and they'll be super hyped up to avenge their loss in the most visible game of the season so far. If SU beats Duke on Saturday I believe they'll finish the regular season unbeaten without another loss. Yeah, Cavalier fans - I said it. 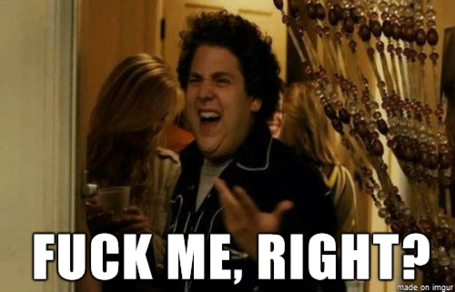