Share All sharing options for: And The Grand Syracuse T-Shirt Madness Reaches Its Inevitable Tipping Point

One day, mathematicians will try to figure out how much it would cost for one person to purchase every official t-shirt that has ever been made available to Syracuse Orange fans and I believe that number will be five figures. At least.

We love our t-shirts. Actually, I take that back, we love making t-shirts. And while we've all had a good time having some fun with the often cringeworthy phenomenon, at some point the parody stopped being a parody.

The tipping point came at roughly 9:48 p.m. EST, almost exactly a half-hour after the previously-undefeated Orange lost to the Boston College Eagles and sent every SU fan into an emotional nosedive, when this showed up in your inbox. 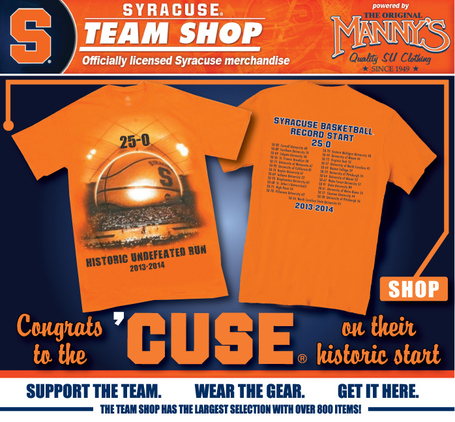 As tipster Eric put it, "arguably more embarrassing than the actual loss - both in substance and in speed in which it was sent out…"